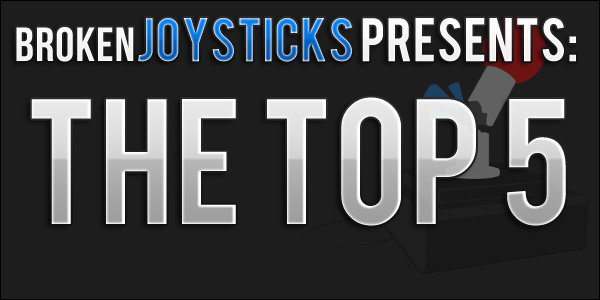 Welcome my dearest readers to a new and hopefully regular segment The Broken Joysticks Top 5 or top 10. Today in our first edition we look at one of the most defining things a character can have, their voice. Today we will go through a list of characters whose voices just demand a place in your memory.

Now this great viral villain has had a single entry into our medium, all things considered it was a pretty terrible game. However, the proud Canadian in me cannot forget Megabyte, Reboot for all its cheesy humor was a great show. Reboot had wide season spanning story arcs, using technology that was incredible for it’s time. So it’s a show about the inner workings of our computers and how all gamers (or users as the show would have you believe) are committing acts of genocide on a regular basis. Within this world resided one of the most threatening villains ever Megabyte. What made him so threatening? It was that deep, sexy and down right evil voice. Tony Jay’s voice breathed live into this virus. He became the shit of nightmares yes he did.[youtube id=”e2iBQBc1hOI” (eg. Wq4Y7ztznKc)” width=”600″ height=”350″]

Killzone was one hell of a series a sci-fi epic of being trapped behind enemy lines. At least that is what Killzone 3 turned out to be. Of all the characters in this series I don’t think any voice work can stand out as much as Malcom McDowell’s chairman Stahl. The chairman is ruthless, cunning and so very slimy. Chairman Stahl wants power and he will stop at nothing to obtain it.[youtube id=”M0caWMUgg3o” (eg. Wq4Y7ztznKc)” width=”600″ height=”350″]

Morrigan, oh my beautiful vixen you are the ultimate temptress. Now many people have told me they prefer a certain Orlesian sister of the chantry. I despise her voice so therefore she won’t be on this list. Morrigan was a twisted yet sympathetic character. She was kept mysterious, which has me raving to know what happened when my Warden went with her at the end of the Witch hunt DLC. For all Morrigan’s sex appeal one of the greatest assets she had was that voice. Claudia Black, the delivery is enough to make a man of my stature swoon.[youtube id=”zN6W2jHoTvw” (eg. Wq4Y7ztznKc)” width=”600″ height=”350″]

Do I ever really need to say it? This series is chalked full of memorable voice actors that it was hard not to fill a list with my favourites (oh boy possible future list!). Solid Snake as voiced by David Hayter, the gruff voice of the greatest procure on site expert to ever be conceptualized. That great and innovative character, that helped make the stealth genre what it is today.[youtube id=”AdX9NutsJZk” (eg. Wq4Y7ztznKc)” width=”600″ height=”350″]

I am a huge fan of the Legacy of Kain series; starting from blood omen you follow the fledgling vampire on a quest for revenge. He must over come a curse from the moment of his very birth. Restore balance to the land of Nosgoth and claim his rightful place as it’s ruler. Kain is a character that across the series will take you through a range of emotions. He may not always be trustworthy yet somehow he always seems to be right. Simon Templeton is the man who gave this character life. The series major strong point is it’s strong and well told story. Though mildly convoluted at times, it offers a tale unlike any other. The voice work done for Kain is by far some of the best I have ever seen in the industry. That’s not to degrade the work of the rest of the cast. Honestly the characters of this series are all wonderfully voiced. Somehow though Kain just comes out on top that is why he is my number one. If you haven’t played this series do me a favor and give it a shot. [youtube id=”JCZtK5d-s0k” (eg. Wq4Y7ztznKc)” width=”600″ height=”350″]