Okay, not really but that is what a lot of people are going to think when they watch the announcement trailer for Arkane Studio’s Dishonored, a first person sci-fi action game.

What we know about the story is that your main protagonist, Quartho,  an assassin framed for the murder of some Empress. And has he ever got a desire for a whole truck load of vengeance. The setting appears to be of the dystopian calibur showing imagery one would expect to see in a Half Life game, or in War of the Worlds. Showing a soldier on mechanical stilts shooting a flaming arrow into then street.

Of course, what first person action game wouldn’t be complete without the ability to slow down time? In Dishonored you absolutely get to slow time down so that you have the time to aim up several shots to take down enemies with ease.

Of course, this being a Bethesda Softworks title means it will most likely be the same engine used for The Elder Scrolls V: Skyrim. It also certainly looks that way in the video, especially with the suspicious use of abilities akin to that of Skyrim’s shouts. 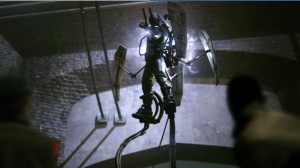 A confusing mix of technologies in this sci-fi setting

Dishonored does look like a very interesting game, in which many similarities will be seen in the first person platforming of Mirror’s Edge, gameplay similar to Assassin’s Creed, and of course the gameplay of Skyrim. I’m certain that this will be many a gamer’s dream title.

Stay tuned for more information on Dishonored in the coming months, this is sure to be an exciting game.