Over the weekend Nintendo of Canada held their annual holiday preview event, which showcases their recently released and upcoming first party titles for the holidays. This year it was all about the Nintendo Switch and their two big titles on display were Pokémon Let’s Go: Pikachu / Pokémon Let’s Go: Eevee as well as Super Smash Bros. Ultimate. I’ve been looking forward to both games but and with the former set for release later this week I got some hands on time of the game.

The version available to play at the event wasn’t the full game but was a shorter demo version of the game which puts you at the start of Viridian Forest shortly after receiving your partner Pokémon.

The game looks great and looks the way that Pokémon X and Pokémon Y did on the Nintendo 3DS in the sixth generation games, though obviously improved for the Nintendo Switch. It also felt nice and familiar going back to Kanto in this Pokémon Yellow remake.

The game does a good job at bridging the gap between the familiar Pokémon gameplay and the new simplistic method of capturing Pokémon from the mobile game Pokémon GO.

Figting in battles with a trainer feels just like it always has with the same mechanics you’re used to. The turn based battles that you’ve grown accustomed to with the previous RPGs is here. Though I didn’t get enough hands on time with the game to dig into the full scope of the battles. I’m not sure if the conveniences that were introduced in Sun and Moon are present in Let’s Go. Namely the way that the game would let you know if a move was effective or not against an opposing Pokémon. This is something that I can’t see the developers taking out of the game as this was, in my opinion, a revolutionary convenience. 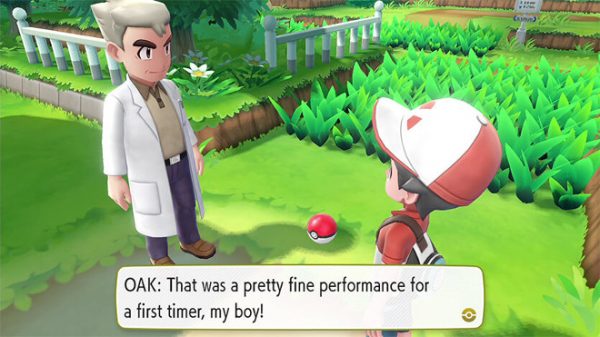 Encountering Pokémon in the wild is now more like an action RPG where you run into Pokémon in the map to begin an encounter rather than have encounters happen at random. This mechanic seems to come from the way that you can pick and choose encounters in Pokémon GO and while it is a deviation from the traditional RPG I actually like this more. It not only gives you the ability to abstain from battles if you choose to, it also lets you pick and choose what Pokémon you do take on.

Two player gameplay also feels good and fits naturally in capturing Pokémon. When you sync up the throw of both players it gives you a capture boost. And trainer battles are also a bit easier with two attacks per turn, though both players share the pool of the main trainer’s Pokémon. Think of player two as a friend joining you on your journey for a little bit and not another trainer teaming up with you.

With the short demonstration taking place at the start of the game I didn’t get to see anything in the way of Mega Evolutions or the likes of Meltan, but with the game releasing at the end of the week it won’t be long.

A few questions were unanswered though. While it was said that only Pokémon from Kanto can be transfered into the game from Pokémon GO, will that ever change? Will the game eventually be linked to Pokémon Bank to allow for transferring of the Pokémon between other mainline games?