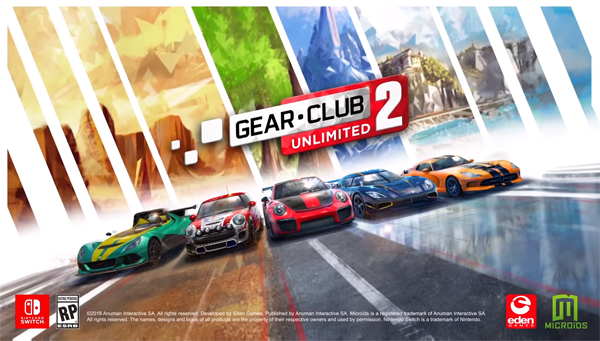 Developer Eden Games has now confirmed that 22 real world manufacturers will be bringing 51 playable cars to this arcade racing sequel on Nintendo Switch.  Improvements over last years game include 3000+ kilometers of derivable terrain spread across over 250 races.

The official description from the Teaser Trailer’s YouTube page gives us a bit of insight into how gameplay has changed in the past year:

“With the pedal to the metal, race along more than 1800 miles of roads! On the mountainside, through a nature park, in the middle of the desert or along the coast, defend your position over the course of more than 250 races, including championships, missions and challenges.”

Here is the full list of available cars set to appear in Gear.Club Unlimited 2 when it launches on Nintendo Switch on December 4th in North America and Europe:

I had a chance to review the first Gear.Club Unlimited last year. Here’s a small excerpt from that review:

“Gear.Club Unlimited presents drivers with a series of themed challenges based not just on the main class/sub class of a vehicle but also the various locales. One particular set of challenges may have you racing along seaside ports in a warm California-like climate while another will another circuit might present mostly night courses. These courses can often look their best during the daylight driving sections when lens-flare strikes just over the roof of the car as you make a hairpin turn. Each course has its own unique layout and varied background objects like buildings, houses and set pieces to help complete the illusion that you are racing down populated metropolis streets. Play close enough attention and you might notice that some courses might reuse sections of tracks, background objects or may be simply reversed or night-time versions of previously played courses entirely. This is certainly understandable when considering the amount, of course, variation Gear.Club Unlimited is providing players, expecting 400 completely unique course variations for a budget price would not only be unheard of but also an unrealistic expectation. “