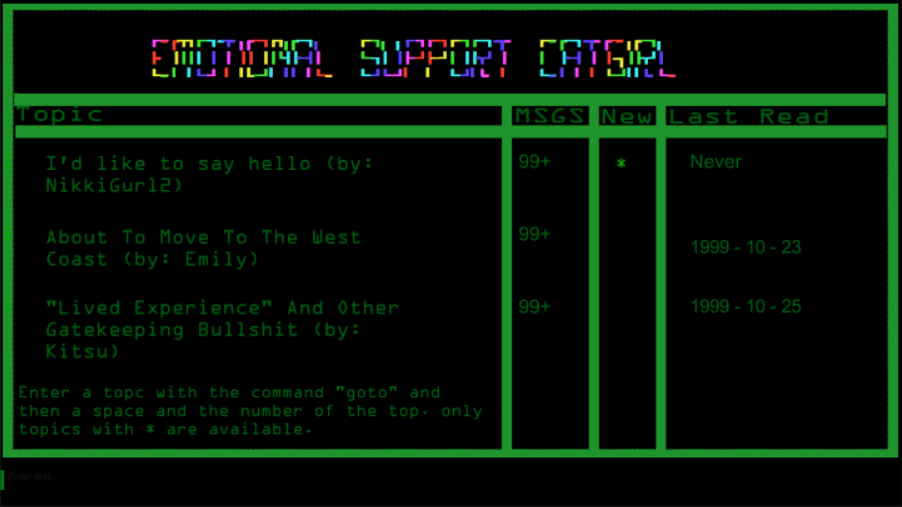 San Francisco, California —  Broken Joysticks Media, a Canadian technology and interactive entertainment focused blog platform announces the release of Emotional Support Catgirl (prototype version) on the Itch.io platform. Developed during the 52 hour Train Jam game development event leading up to GDC, Emotional Support Catgirl tells the narrative of a trans woman living in the Midwestern United States who finds comfort and support through the BBS systems of the 1990s.

Emotional Support Catgirl invites players to experience the journey of Nichole as she connects with an entire cast of other queer transwomen through a private bulletin board system between the years of 1999 and 2000. Emotional Support Catgirl’s adaptation of the Unity Engine provides players with a functional command-line and era specific commands used on bulletin board systems of the era. This is a game forged from the personal experience of its developers. 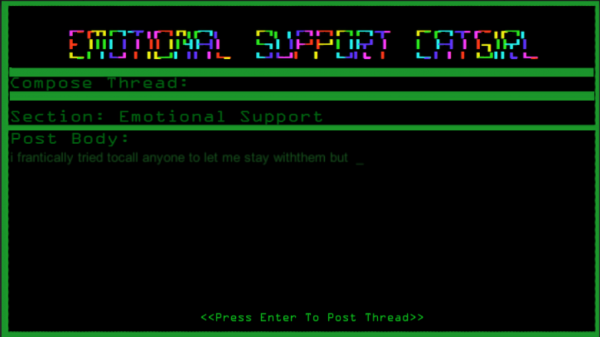 Train Jam is a gathering of game developers from a number of disciplines to develop experimental and interesting titles on the cross-America journey from Chicago, IL to SF,CA during the week leading up to the Games Developer Conference.  This year’s theme was given as “Odyssey” which resulted in 84 unique entries being submitted. More information on Train Jam can be found on their website – http://www. trainjam.com/ All 84 unique games submitted to the Jam can be viewed here – https://itch.io/jam/train-jam-2018/entries.