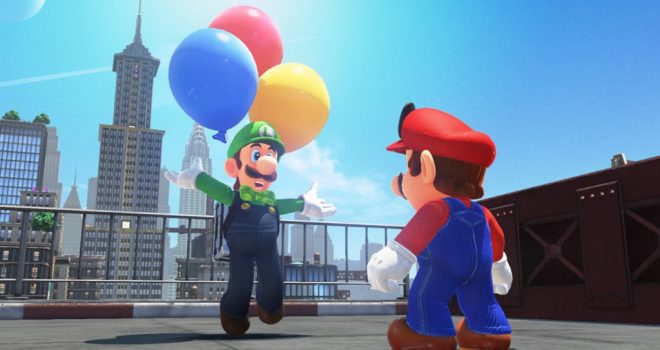 Super Mario Odyssey Update – Starting today, you can download a free update for the Super Mario Odyssey game for the Nintendo Switch system. The free update adds a fun new minigame called Balloon World (internet access required*), which you can play after finishing the main story. To get started, just find Luigi in a kingdom and talk to him! In Hide It mode, you can take a balloon and hide it somewhere in that kingdom for other players to find. In Find It mode, you must find balloons hidden by other players. There’s a limited time to hide and find the balloons, so act fast! All the secret and out-of-the-way areas you found while playing the game will come in handy! The update also adds new outfits and filters to use in Snapshot Mode!

PAYDAY 2 – PAYDAY 2 is an action-packed, four-player co-op shooter that once again lets gamers don the masks of the original PAYDAY crew – Dallas, Hoxton, Wolf and Chains – as they descend on Washington, D.C., for an epic crime spree. (Additional games and systems required for multiplayer mode. Sold separately.) PAYDAY 2launches on Feb. 27.

SteamWorld Dig 2 – SteamWorld Dig 2 takes you on a platform mining adventure. When an old trading town is struck by mysterious earthquakes, it’s up to a lone steambot and her unlikely companion to uncover what trembling terrors lie beneath. Dig your way underground and explore vivid worlds riddled with treasure, secrets and traps.

Fat Dragons – Fly your dragon and do battle against enemy dragons invading your territories! Fight within the ruins of an ancient city, then do combat among the trees in a lush jungle. Dodge the molten fireballs launched from an erupting volcano, and avoid pounding rain storms and lightning strikes amidst the clouds – all while taking out your enemies!