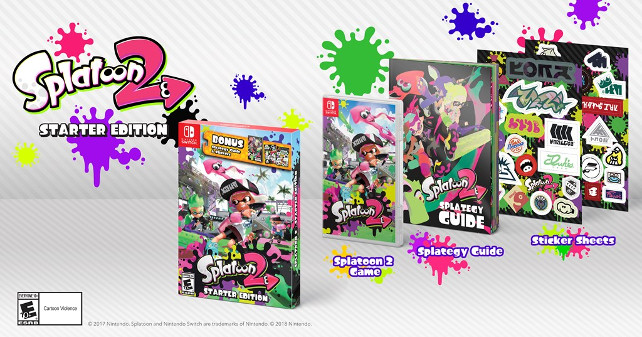 If aren’t among the 4.9 million who have picked up a copy of Splatoon 2 yet, a great deal is just around the corner.

On March 16th, the Splatoon 2 Starter Edition will launch in stores. The special bundle includes the full game, a 100-page Splatoon 2 strategy guide, and two sheets of Splatoon stickers. The bundle will retail for a suggested retail price of only $59.99 USD. That’s the same price as the stand-alone game, so this new Starter Edition adds even more value.

Splatoon 2 launched for Nintendo Switch last summer and has sold more than 4.9 million units worldwide so far. The action-filled game pits teams of Inklings against each other in a variety of fun and messy modes. Since launch, Nintendo has consistently rolled out new content for the game, including recurring fan-favorite competitions called Splatfests, a new battle mode, as well as new gear and stages, like the just-announced Dark Tetra Dualies weapon and basketball-arena-themed Goby Arena stage.

Also, as we brought you yesterday, Nintendo has announced a brand new 2-pack amiibo of Pearl and Marina, two of the most popular new characters in Splatoon 2. These amiibo figures will launch in stores later this year.