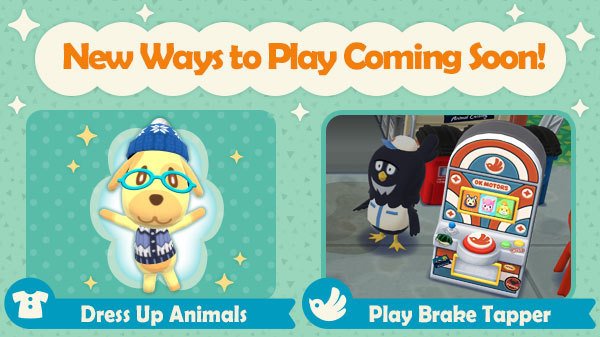 Animal Crossing: Pocket Camp will be undergoing some scheduled maintenance early next week. The maintenance will take place starting February 13th at 11am ET and run until later that day, wrapping up around 6pm ET.

The maintenance is certainly to bring in a few new features to the game, which have been teased about on Twitter. These include the ability to dress up your animal campers as well as a new device coming to OK Motors. The “Brake Tapper” device looks to be a slot machine. There is little information to go on but likely this will have a free daily play followed by spending of Leaf Tickets for additional plays.

There will also very likely be more to the dress up aspect. Look to have animals have preferred clothing options and request specific clothing items be crafted to their liking. This could also be an added request before an animal will come to your campground.

Lottie’s Gothic Rose Festival just wrapped up yesterday. Be sure to go by your garden, pick the remaining roses, and collect your Bells from Lottie.

Update: The Japanese Twitter account for Pocket Camp @pokemori_jp tweeted out a teaser image for the next in game event from Lloyd’s perspective. The next series of furniture items seem to have a crystal theme.