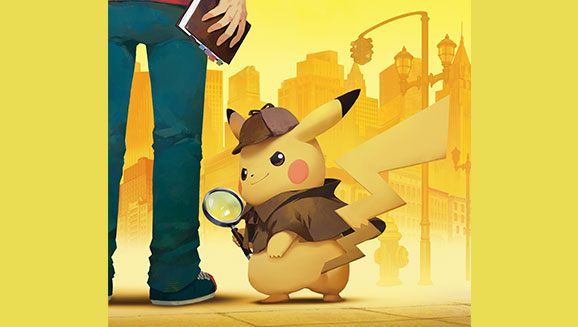 Take the role of young Tim Goodman and explore with his talkative partner Pikachu in the action-adventure game Detective Pikachu, coming to the Nintendo 3DS family on March 23rd, 2018.

Tim and this gruff, coffee-drinking Pikachu have teamed up to investigate the disappearance of Tim’s father. Look for clues, talk to witnesses, and uncover the secrets of Ryme City!

A special Pikachu and his friend Tim uncover the mysteries of Ryme City in Detective Pikachu for systems in the Nintendo 3DS family. This Pikachu is unlike any other—the gruff Pokémon talks tough, loves strong coffee, and boasts about his brilliance as a wannabe great detective. Side by side, Tim and Pikachu will search for clues and talk to witnesses to investigate the disappearance of Tim’s father, Harry.

You’re sure to encounter plenty of other interesting characters as you explore the big city, including Brad McMaster, a police lieutenant; and Mike Baker, a man who used to work with Harry. Plus there are countless Pokémon to meet, and that’s where this Pikachu’s talents really shine—he can communicate with other Pokémon—and with Tim, too. Look forward to plenty of other fascinating people in Ryme City…but it’s up to you to figure out who to trust!

As you find new evidence, Pikachu will help you figure out when you’ve discovered something important. With his “A bolt of brilliance!” catchphrase, he’ll let you know when he’s learned enough to advance the case. And keep an eye out for Pika Prompts, short video clips that include Pikachu’s quips and antics, and might even contain a hint or two.

For those players who are new to sleuthing and may need some help in uncovering the evidence, Detective Pikachu features an Easy Mode, where Pikachu will provide handy hints on what to do or where to go next.

A special Detective Pikachu amiibo is in the works, too. This amiibo features a sleuthing Pikachu that’s larger than the standard amiibo, and when used with your game, it can unlock short videos that may contain helpful hints for your investigation.

Check back for details on this special limited-edition amiibo.

Detective Pikachu, coming to systems in the Nintendo 3DS family on March 23, 2018. No word on price point yet.