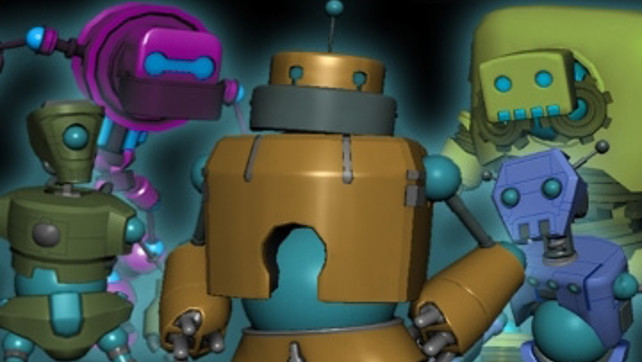 One of the last scheduled games for the Nintendo Wii U is due to land in the eShop on Thursday with the release of Jolt Family Robot Racer. The game is a fast paced, four player racing party game.

The game at its core is a competitive platformer that’s all about maintaining momentum with skillful navigation. The players compete to be the last robot standing. Using a charged burst of speed called the JOLT, and an array of different objects in the environment; your goal is to outperform or outright sabotage the other racers. Eliminated players are down but not out through the use of the VOID, a random Sabotage Power-Up that allows players to initiate revenge and change the outcome of the race.

The JOLT is a player’s primary utility to winning the race. It has 3 stages of charge, each one taking longer to store but each allowing you to shoot considerably further. If the player can time its use correctly; they can use it just before a curve to shoot up a wall or JOLT through an obstacle. Many short cuts in the levels are JOLT dependent.

Once eliminated, a player has the opportunity to execute the VOID. After punching in the correct sequence, the VOID player is gifted a random Power-Up to inflict mass-disruption to the existing racers.

The game features multiple Game Modes; Racer is the standard and most game modes are based off this, such as Light Mode (where the level is dark and the leading player has a light attached to them).

The game is developed and released by Cooply Solutions Ltd. It will retail for $6.45 CAD in the Nintendo eShop.