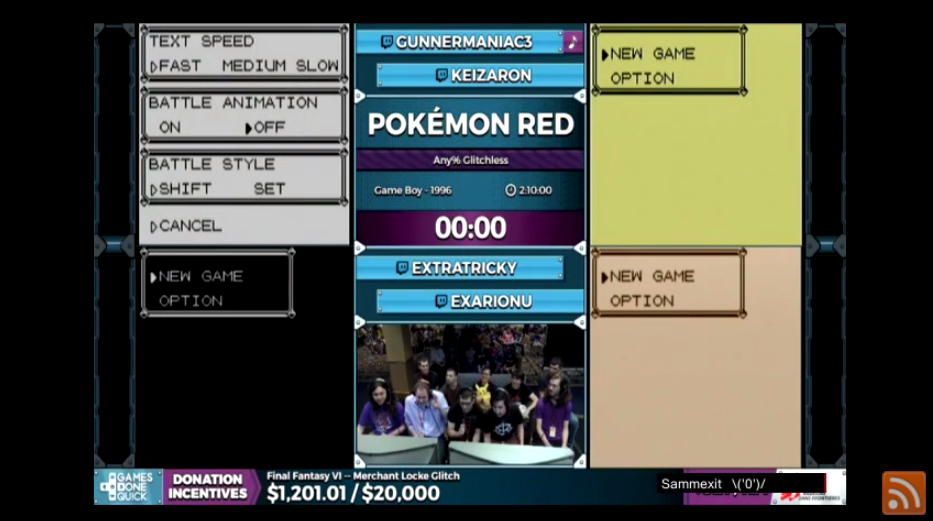 Take a trip back in time with me, not too far, but to SGDQ 2016. Last year the folks at Summer Games Done Quick hosted a four way race between Gunnermaniac3, Keizaron, Extratricky and Exarionu to see who could complete Nintendo’s Pokemon Red with the fastest time.

The Pokemon games have had a dedicated speed running community for some time and while I can’t profess to be anything other than a casual consumer of speed run content, I find these runs in particular absolutely fascinating. Perhaps it is the fact that the generation 1 Pokemon titles have been distilled down to a mathematical formula at this point – with examples like the community discovering that running the game with Nidoran and the use of Horn Drill, in particular, being the most effective strategy to completing the game. Maybe it is essential but potentially overlooked details like the fact that Viridian Forest has individual grass tiles that won’t spawn encounters that make these games so appealing to me.

Whatever it is about Pokemon Speedruns, if you’ve ever wondered what exploitable mathematics and mechanics that make running a multi-hour RPG possible in under the amount of time it takes to watch The Avengers – watch this SGDQ 2016 run. Pokemon Red’s community does an absolutely fantastic job explaining the ins and outs of their chosen game WHILE running it!

If you’re curious about what goes into a Pokemon speed run make sure to head over to the Pokemon Speed Run wiki. They’ve got a leader board, strategies for every generation, profiles on the various runners and other cool tidbits.