After crashing on an unknown planet, Captain Olimar encounters the adorable but fierce Pikmin. Use their strange powers with touch controls to solve environmental puzzles and collect Sparklium to refuel his ship, the S.S. Dolphin 2. A world of discovery and hostile wildlife awaits!

Hey! PIKMIN is the first Pikmin game for the Nintendo 3DS and the first game in the series on a portable platform. It’s also the first sidescrolling incarnation of the series which has been primarily a 3D exploration game. But while the genre of game has changed, the basic concept remains the same. 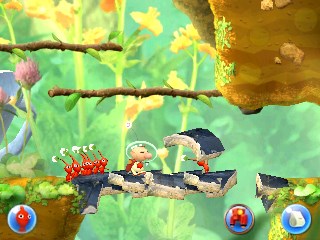 Much like the original games you play the game as hapless explorer Captain Olimar who has been marooned on a planet. His only hope of escape is to command Pikmin, little environmental creatures, to do his bidding and help him escape. In this side-scrolling adventure you’ll explore the foreign planet to discover treasure, gather Sparklium and refuel Olimar’s crashed ship.

Each of the different types of Pikmin have different abilities, traits, and weaknesses. Flame-resistant Red Pikmin, rock-solid black Pikmin, and even Flying Winged Pikmin. You can use those abilities to solve puzzles and battle enemies as you explore this new world.

The game seems to broken up in to worlds and levels, if the demo is any indication. The demo has an intro and turorial level as well as two basic levels to play through to give you a feel for the game. 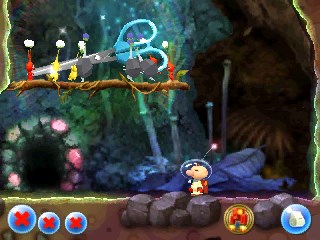 To start Olimar is a pretty vulnerable hero. You can’t jump and can only move from side to side, through doors, though he can climb up vines. For most of the exploration he relies on his Pikmin allies. Using the touch screen you can scroll between the different Pikmin you have collected in a level and whistle to regroup them to your side. The whistle is also useful to call to you new Pikmin that may be out of reach on the top screen. Tapping the screen will let you toss a Pikmin at your leisure.

The levels in the demo have pretty solid level design which are packed with plenty of secrets and are unforgiving. You’ll need to toss Pikmin to break obstacles as you progress through the levels, but there are certain spots that will become unreachable if you are careless with your tossing. This can certainly make for some replay value as you look to collect three items scattered through the levels. While you are collecting the Sparklium through the game these items contain a larger amount of Sparklium, which are undoubtabley necessary to obtain the 30,000 Sparklium needed to refuel and get off the planet.

Released alongside the game is a Pikmin amiibo figure which you can level up by gathering a certain amount of Pikmin in Pikmin Park; the higher the level, the more Pikmin you can call upon when on an expedition. You can also apparently use your compatible amiibo to find secret spots and solve touchscreen puzzles. 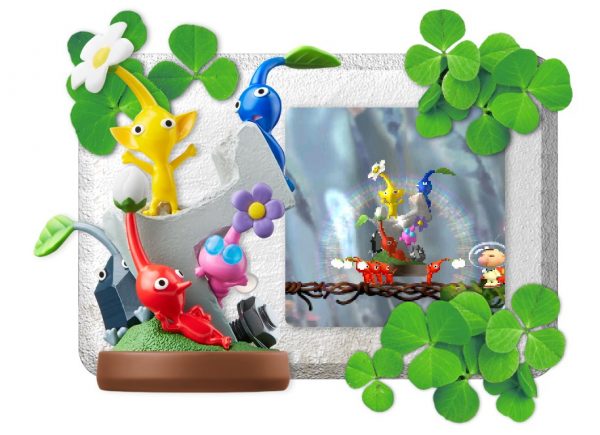 The demo levels were great fun to play and I found myself replaying the levels to find all the items and secrets.