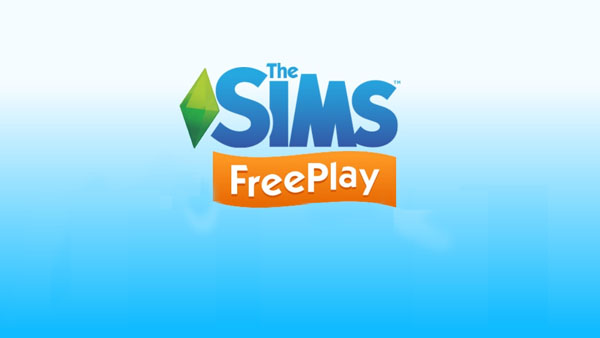 The Sims has been a staple for simulation fans for the better part of two decades now, the original (released in 2000) is almost old enough to drink in the United States.  While I’ve been a fan since the first iteration, I can’t profess to have partaken in any of the mobile entries in the franchise with the sole exception being The Sims 3 on the Nintendo 3DS, which I found to be so sub-par it wasn’t worth playing. Perhaps that is why it is so perplexing to me that my mobile vice at the moment is a five-year-old Sims mobile title from 2011 – The Sims Free Play.

Recreating friends and family has always been my go-to activity when enjoying brief obsessive periods with The Sims and the week I’ve spent with Free Play is no exception. Within the first 20 minutes of booting up Free Play, 3I had a pretty good facsimile of both myself and my wife, ready to go. This is where I found one of the first roadblocks that this game was going to throw in my way – at the start of the game a ‘family’ consists of only one Sim and you can’t move in with another sim until you’ve obtained the rank of ‘good friend’ or higher. As frustrating as that is (and for simple enjoyment purposes – it is frustrating) – I labored forward and purchased two lots for my wife & I, but elected to only build one house – SUCCESS!

Gameplay in The Sims Free Play will be instantly familiar to anyone who has played either The Sims 2 or The Sims 3. You guide your simulated people through the minutia of daily life – everything from making breakfast to sleeping, to skipping work entirely and watching a movie marathon is available to you at just the tap of the screen.  On the bright colors, plum-bobs, interface design, and available actives give the impression of the same depth as this mobile game’s PC counterparts. It all works as you would expect: Sims sleep in beds, can enjoy passive time on the computer and chill in the Jacuzzi when times get rough. After assigning your first set of tasks you’ll probably instantly notice one of the key differences… 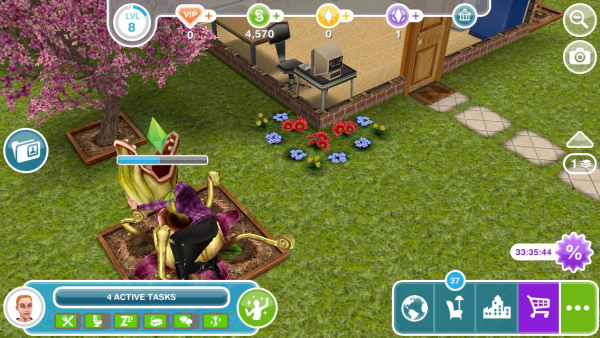 Actions in The Sims Freeplay take place in real time and players have no control to speed up the passage of time or slow it down. In essence, this makes playing with multiple Sims an exercise in managing various timers to see your chosen task completed.  Activities in game roughly correspond to their real life counterparts: Watching a movie takes 2 hours in real world time, making dinner can take half an hour etc. While this would be super annoying – *sarcasm* luckily you can PAY EA money to avoid waiting around for your tasks to complete – making this one of the friendliest-looking Skinner boxes around. Testing your patience to wait for several hours versus the options of opening your wallet and dumping out pocket change for micro transactions.

It is not all doom & gloom and waiting hours for your bars to fill up, however. There is a very positive upside to how The Sims Freeplay’s core mechanics work that can actually bring quite a bit more enjoyment out of the game without having to close it.  Just like in the PC versions, you’ll need to manage a number of meters like thirst, hunger, cleanliness, social time for each of your Sims. Thankfully the shortest activities (say eating a snack for 1 minute vs cooking dinner for half an hour) still count towards these metered needs. I’ve had the most fun simply telling my sim to do one short activity after another to meet their needs. This strategy not only cuts down on the amount of time you are outside of the game but also provides a similar feeling to playing the PC titles – watching your Sims interact or do other daily activities without having to go through the laborious time commitment. 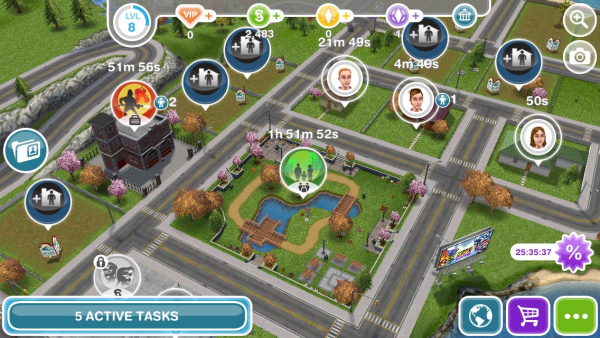 The Sims Freeplay has a few glaring downsides to it: the inability to spawn infinites amount of money or speed up time takes some of the creativity and humorous moments from the core experience. Sims themselves lack any kind of will of their own or even the ability to cue multiple actions in a chain to automatically carry them out – this means you’ll literally be guiding each of their actions independently. EA’s constant reminders that “HEY YOU CAN SKIP THIS TIMER IF YOU JUST PAY US MONEY” can be more than a little obnoxious as well. Despite all of these negatives I’ve enjoyed my time with The Sims Freeplay enough that is has been my go-to time waster for the past week or so. Without paying any real world cash I’ve got a mobile Sims experience that on the surface resembles its’ larger counterparts while still including elements that have made the series so enjoyable these past 20 years (seriously if I could get a pinball table in my living room I would so DO IT).

My best advice if you decide to try out The Sims Freeplay is to adjust your expectations accordingly. Know that you will be pestered to buy micro transactions, with some creative gameplay choices you can get around these for the most part, none of the self driven or goal focused A,I exists in this game and that in the end The Sims Freeplay doesn’t offer parity with the PC Versions, even if you were to buy EA’s post expensive micros transaction. Still, a stripped down mobile Sims is a stripped down mobile Sims and I’ll be playing it for the next little while at least.