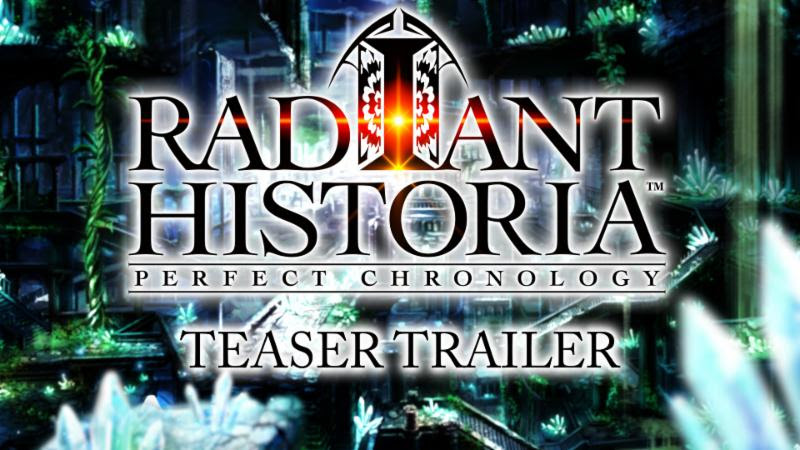 Radiant Historia: Perfect Chronology sees the player once again take the role of  Stock, an Alistel Agent, as he tries to unlock the power of the White Chronicle Relic, granting him the ability to travel between two alternate timelines.  New story content introduced in the Nintendo 3DS port include a new side character, Nemesia who will allow Stock to travel to a third alternate timeline which contains episodic “What if” content branching from the original game’s twin timelines. In additional to this new content and a new introduction movie Radiant Historia: Perfect Chronology will also include New Game+.

Here is how Atlus described Perfect Chronology in their press release:

“You’ll once again take the reins of Alistel operative Stocke as he unlocks the power of the White Chronicle relic and gains the ability to travel between two alternate timelines. With his new-found powers, Stocke will need to right the wrongs of the past in order to prevent the total annihilation of the world. This time though, things are a bit different. Redesigned character art, new character voice-overs, a brand-new opening animation by A-1 Pictures, new theme song, event illustrations, five new tracks from original composer Yoko Shimomura, and additional difficulty settings will enhance the experience in this fresh take of a beloved story.”

Next up is Shin Megami Tensai: Strange Journey Redux sends our heroes – a team of UN special experts – against a demonic parallel version of Earth that threatens to consume our own world. This enhanced port brings a brand new character, updated visuals, new enemies and more. Are you ready to blast off in this sci-fi fusion of demons, technology and classic SMT gameplay?

Here is how Atlus USA describes the game:

“In Strange Journey Redux, you play as a brave United Nations soldier investigating a spatial anomaly called the Schwarzwelt–a dome of dark energy that threatens to consume the world. Inside, you’ll find it home to a nightmare mirror of our own Earth, populated with demons dying to meet you. The game touts brand-new illustrations by Masayuki Doi, updated visuals, UI tweaks, and more to make this journey back into the Schwarzwelt… even stranger.”

Last but certainly not least is the fifth entry in the Etrian Odyssey franchise, Etrian Odyssey: Beyond the Myth. Fill the shoes of a brand new adventurer as they attempt to reach the top of the Yggdrasill Tree.

Here is Atlus USA’s official description of Etrian Odyssey: Beyond the Myth as well as the teaser trailer:

“The fifth main installment of the long-running Etrian Odyssey series is ALMOST HERE! Etrian Odyssey V: Beyond the Myth chronicles the quest of a new adventurer (hey, that’s you!) as he or she attempts to reach the top of the towering Yggdrasil Tree. For it is said that whoever braves the dangers of the dreaded Yggdrasil Labyrinth and reaches the summit will have their greatest wish fulfilled … Map making, party building, FOE hunting, and more await! Learn about the mysteries of the Yggdrasil Tree in the trailer below:”