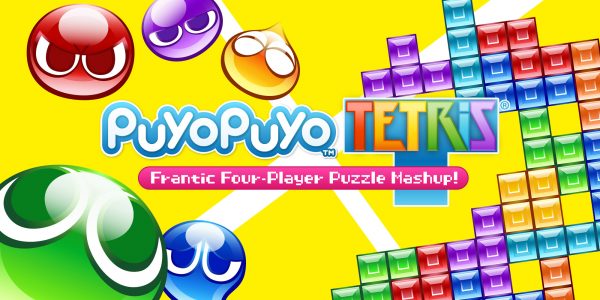 One staple in video games that seems to carry over generation after generation is Tetris. Most people know about this game and most have played it at some point in their life. You would be hard pressed to find someone who has never come across this game at some point in their life. Another series of puzzle tile games that many have come across in some form is Puyo Puyo. If you have played Doctor Mario, you have played something like Puyo Puyo even if you haven’t realized it. What Sega has brought to us is two great flavors together at last.  I was particularly excited for this game since I got word of it and playing it was pretty much what I was hoping for.

The first interesting thing about Puyo Puyo Tetris is the story mode and the style of the art used for this game. The game is very bright, colorful and cheerful. The story is definitely not a Greek tragedy to say the least. It’s the lighthearted adventures of some Earthlings getting very mixed up with some space people, oh, and of course I can’t forget the romance between one of the characters and “The Dark Prince” which leads to the threat of the world. Eventually the Tetris space people and Puyo Puyo Earthlings must band together to save everyone, but of course they occasionally fight each other as well. The story is definitely superfluous, but immensely enjoyable and cute. What the story mode really does is offer some fantastic challenges. As you progress in the story mode, the challenges get more and more intense and honestly, even a Tetris veteran like myself had some difficulty with the challenges, especially the fast paced time challenges that offered little room for error, such as when you have to gain a certain amount of points in 30 seconds. Although frustrating at times, once you conquer a level, the feeling of satisfaction you get is hard to beat. I felt great excitement finding a new strategy or thinking out how to obtain more Puyo chain combos or multiple Tetris lines and beating whatever challenge came my way. It also helped, to see my opponent baffled in defeat and allowing me to progress the story which unlocked new fun characters and more fun challenges. This is a game that does not allow for boredom if you are a puzzle fan. If you want to skip the story, you can also play Arcade or other solo modes, but then you can’t do as much customization or collect new characters. 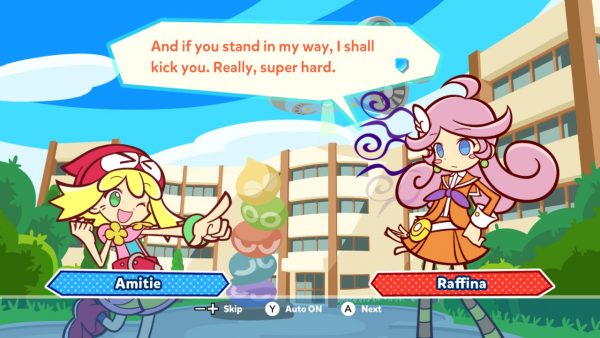 Story mode is not all there is to this game, there is also an interesting multiplayer mode. The multiplayer mode has traditional battle mode which allows you to sit with your friend on the couch seeing who is the best in Tetris or Puyo. Are you better at Puyo and your friend is better at Tetris? Well, you can play one game while your friend plays the other and you can see who is better when you both play the games you are best at. I did this, and I can say, it was much more fun being evenly matched than her being constantly defeated by me at Puyo or me being constantly defeated by her at Tetris. It allowed for us both to play on even footing. There is also a fun switch mode that allows you to switch off between Puyo and Tetris every 30 seconds until one opponent loses at one of the games. There is fusion mode that combines both Puyo and Tetris in one new chaotic game where Puyo and Tetris meet and you need to arrange tiles using Puyo chains and Tetris lines to clear your board and use Tetriminos to crush Puyos that may be putting you at risk. Big Bang mode has you throwing attacks at your opponent and vice verse to see who will be the last man standing, party mode to see who can have the most points at the end of two minutes while obtaining buffs and throwing debuffs and roadblocks to your opponent and of course there is endless mode, the ultimate endurance test, but if you can’t get your friends over, there is also online play as well for endless Puyo Puyo Tetris fun. 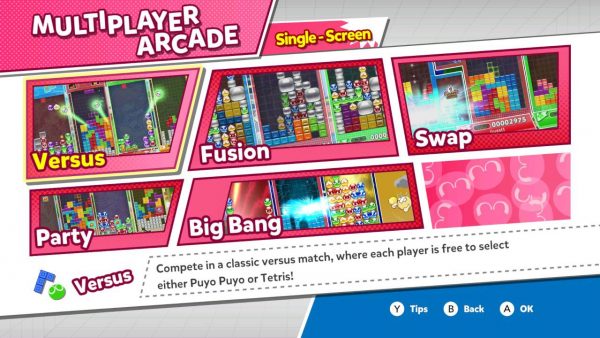 The only downside to this game for me were some slight control issues. Sometimes the controls would be too sensitive and cause a rotation to be off or placed incorrectly. I found myself using the D pad on the PS4 version of the game only because the joystick was not accurate to what I was intending to do with a piece. I eventually adapted to the controls after playing a while and played to my best abilities, but it is something to keep in mind. 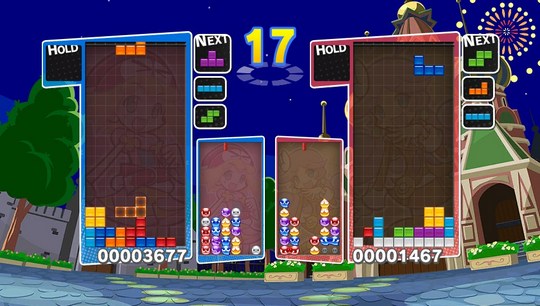 With a fun, humorous, silly story, plenty of challenges and lots of replay value for any puzzle fan, this is a must have game and recommended for the casual and hardcore player alike. Try it on any available console today!