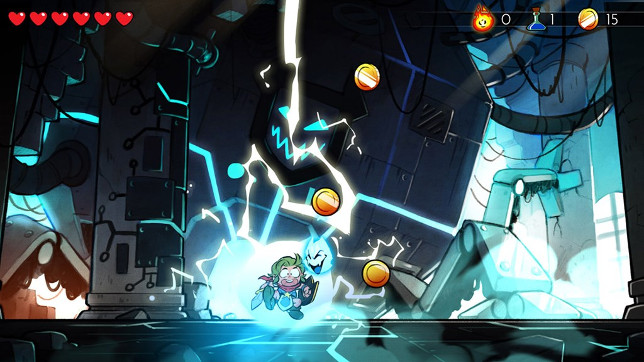 Cursed into a half-human, half-lizard monstrosity by the Meka-Dragon, you are in search for a cure! The only way you can return to human form is to find the Salamander Cross, a magical item with the power to remove curses…

With each dragon slain, the curse intensifies, transforming you into different animals! Explore large, interconnected locations populated with grumpy monsters and exotic dragons!

Play as the game’s classic character, Hu-Man, or as his brand-new, long-awaited co-star Hu-Girl. You can also inhabit Lizard-Man, Mouse-Man, Piranha-Man, Lion-Man, and Hawk-Man, and use their unique abilities to uncover the land’s deepest secrets.

Enjoy 3 difficulty levels catering to players of all types, and switch from modern graphics and sound to 8-bit graphics/audio at any time – even during gameplay!

URBAN TRIAL FREESTYLE 2 – The sequel to the popular urban-themed stunt bike racer has launched exclusively on the Nintendo 3DS family of systems. This jam-packed sequel brings a fully functioning tricked-out track editor with online sharing functionality that allows players to share their creations with friends. The game also offers twice as many levels to rampage through and a myriad of new bikes and customization options available to unlock. For people who want to try before they buy, a free demo for the game is also now available.

Zombeer – You don’t know what time it is, the phone rings, you wake up in the Mexican bar “Guys in Thongs”, and your girlfriend’s on the phone threatening to have a few drinks with the University Chancellor. You notice a bite on your arm that looks really bad, and something smells even worse than your beer-breath: the Chancellor is after your girl!

Go through Mianus City fighting with hungry students, luscious cheerleaders, teachers wanting to examine your brain more closely, exotic dancers… and even a guy in thong who can’t stop dancing. Your girlfriend Karen is a zombie and the Chancellor is ordering the hordes to stop you from saving her. The only solution is to drink Zombeer to prevent zombification and to try to get as close to him as possible.

And all from the mind of a disturbed movie and video game buff who’s never done a stroke of work in his life. Want to reach the end? Well, put your tight wetsuit on and fight your enemies with the craziest weapons for the best wrap party you’ll ever have!

Rayman 3 – Wreak havoc with Rayman When Globox, Rayman’s best friend, inadvertently swallows a dreadful black Lum, it isn’t the end of the world — but it could be! To prevent a full-scale invasion of malicious, ill-mannered hordes there is only one solution: Rayman must get someone to treat his burdensome pal.

Rayman Advance – Classic Rayman action! In Rayman’s world, nature and people live together in peace. But one day, the evil Mister Dark steals the Great Protoon that provides energy and balance in the world. Betilla tried to stop him, but she wasn’t strong enough. Now strange new creatures appear and capture every Electoon they can find! They definitely need a hero… Rayman to the rescue!