I’ll be honest. After the initial craze for Pokémon GO hit I somewhat fell off the bandwagon. I wasn’t one of those people who spent hours and days walking around seeking the elusive creatures, sucking up tons and tons of data. I’ll admit, after I let a friend without mobile data tether off of my data and I ended up going way over my monthly data, I really scaled back on my usage.

But I have been keeping tabs on the game and am not one of those who uninstalled the game and wrote it off. I’m sure there’s much more to come.

Recently the developers at Niantic made adjustments to the CP (Combat Power) of various Pokémon, with some Pokémonhaving their CP increased while others taking a hit to their CP. The reason for the change was stated as a way to allow more balanced and competitive battling and training experience in Gyms.

Lastly the game has not updated to include the Pokémon Ditto, which disguises itself as other Pokémon. Some Pokémon may actually be Ditto, and when you capture them, there’s a chance that Ditto will reveal itself. If you do encounter a Pokémon that is Ditto in disguise, the Pokémon in that specific encounter will also reveal itself as Ditto for other Trainers.

Ditto is also a unique Pokémon when you interact with Gyms. When training or battling at a Gym, Ditto will copy the appearance, types, and moves of the first Pokémon it sees, and it will stay that way through the remainder of those Gym battles.

Speaking of tracking Pokémon in GO, a local website to track Pokémon has popped up in PokéHamilton. The map shows the spawn locations of Pokémon, how long until they will dissapear from the location, as well as the spawn radius. The site is in a very early Beta stage (and is down often) but it dead on accurate from my playtesting experience.

The developer has also set up an automated Twitter account to alert for rare Pokémon, though this is for the Hamilton, Ontario area specifically. 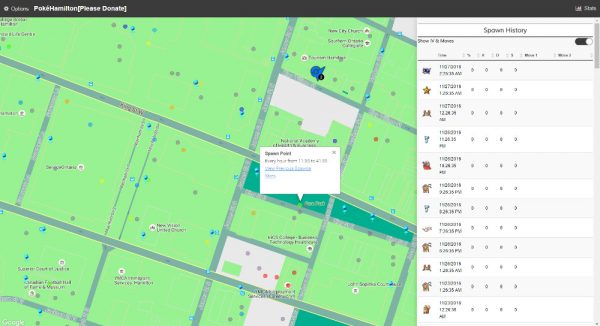