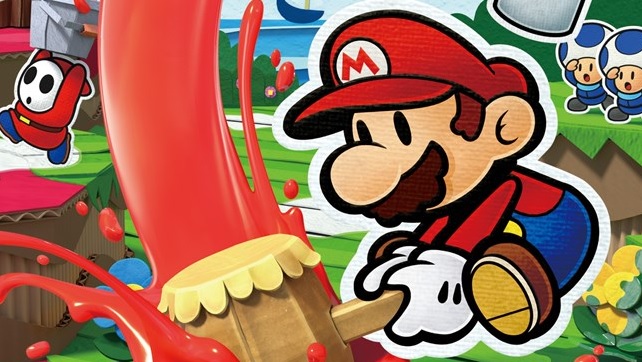 Paper Mario: Color Splash – A mystery’s afoot on Prism Island and only Mario can solve it by restoring the land’s vanishing colors with his new Paint Hammer. Puzzling battles await, but never fear – there’s always a clever way to deal out the powerful Battle Cards up his sleeve. These fresh layers of strategy make this one of the most action-packedPaper Mario adventures ever! Paper Mario: Color Splash will be available on Oct. 7.

Mario vs. Donkey Kong 2: March of the Minis – It’s opening day of the new Super Mini Mario World theme park, and Donkey Kong has kidnapped the guest of honor Pauline. In this Nintendo DS action puzzler, it’s up to you and an army of freshly assembled Mini Mario toys to rescue her. Guide your Mini Marios through more than 80 perilous stages while looking out for mini-minions.

Disney 2-Pack (Frozen-Big Hero 6 Combo)– Disney Frozen: Olaf’s Quest Every day is a snow day with Disney Frozen: Olaf’s Quest, the new, puzzle platformer video game based on the upcoming animated movie of the same name from Walt Disney Animation Studios and Walt Disney Pictures! Big Hero 6: Battle In the Bay Following on the heels of their super hero debut, the Big Hero 6 team has targeted a dangerous gangster named Yama and his legion of out of control fighting robots! The team is after Yama because he is a threat to their identity as Big Hero 6. Take control of the stars of the film in this action-packed combat platformer! Send robots flying across the screen as Hiro with his electro-mag gauntlets! Zoom through levels at top speed as GoGo! Slice and dice as Wasabi with his plasma blades! Smash and burn as Fred in his Kaiju monster super suit!

Epic Word Search Holiday Special – Epic Word Search puzzles are huge – and they’re back in this brand new collection of seasonal puzzles! The Epic Halloween Word Search – There’s pumpkins, spiders and blood, but you’ll also wear some fabulous costumes while you collect candy! Enter at your own risk! The Epic Christmas Word Search – The biggest gift you’ll get this year! Deck the halls, sing some songs and wrap up warm to beat the cold! The Epic Monster Word Search – Prepare for a scare with this monster. Vampires, werewolves and zombies, oh my! You’ll never know what’s lurking around the corner. Boo! The Epic Love Word Search – Holidays don’t stop after December! Everyone loves Valentine’s Day, so celebrate it by smooching your way through this extremely huggable puzzle. The Epic Summer Word Search – For our friends down under enjoying a scorching Holiday season, or to distract the rest of us from the cold weather. It’s July in Christmas!

Mega Man X2 – Fresh from defeating Sigma and his Mavericks, Mega Man X tracks down the remaining rogue Reploids to an abandoned factory where they are continuing their rebellion. While Mega Man X is kept busy by eight new Mavericks, a new threat plots to resurrect a secret weapon that is all too familiar. Download this Super NES classic starting today!