There are a lot of find the difference games out there, with tons of them for free games in the app stores. To be honest I haven’t played too many of them as they aren’t really my cup of tea. Sure they’re simple in practice, but I’ve often looked at a title shot and moved on. Heck, there are times when a game title and visuals looked rather interesting and it was the revelation that the whole game was spot the difference and I was too annoyed to even look any further.

It’s refreshing that not only does Lightwood Games embrace the genre but also takes a cute little play on the whole genre in their title. And with the recent success of Nintendo’s Splatoon series, calling the game Splat the Difference makes one really connect the game to Nintendo.

Ironically, Splat the Difference was originally an iPhone game released back in 2012 so any connection to Splatoon is mere coincidence, however a partnership or licensing agreement between the two companies for a followup to this title would undoubtedly sell like gang busters.

Lightwood Games completely overhauled Splat the Difference for the Nintendo 3DS, making many improvements. The game is a spot the difference style game, where you splat the difference with with paint when you find it. 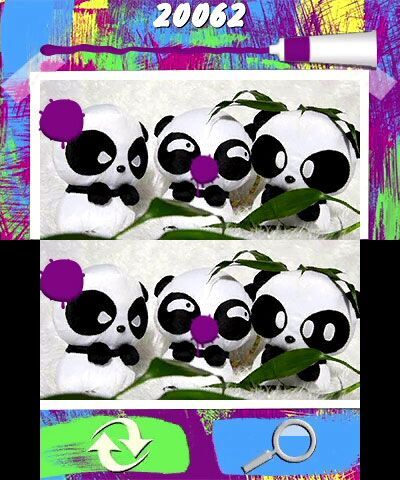 The game supports not only single player mode but also a multiplayer mode as well. Up to four can play with just one copy of the game using Download Play. The game features hundreds of pictures and differences that change each time you play.

The four game modes are Classic where you find the differences before time runs out as well as casual where you can relax and play without a timer. There is also a frenzy mode where there is only one difference, but you have to find it fast. The final mode is Mirror mode where one picture is flipped upside down.

Overall the game is pretty straight forward and simple to play, but with the obvious challenge of finding subtle differences between photos the fun you’re going to have depends on your own patience. Some of the differences are very subtle, and yet some of the more glaring changes are also easily overlooked.

One of the great aspects of the game is how loose and free the multiplayer in the game is. Only one copy is need in the game for all of the multiplayer modes. Splat the Difference features full download play, meaning that up to four players can play the complete game with only one copy of the game, with the only noticeable difference in the download copies being the lack of backround music. Also multiplayer mode removes the time limits in single player mode, allowing for leeway so you can focus on beating your friends rather than the clock.

My kids both love the game, with Splat the Difference being a perfect game for them to boot up and play for a few minutes when they are bored. It’s also perfect for true on-the-go gaming when there isn’t an internet connection around.