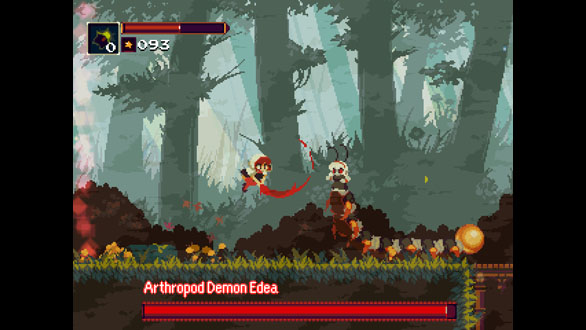 It’s been a little while since Momodora: Reverie Under the Moonlight was released on Steam, but it’s definitely a title Metroidvania fans should take a look at. The game is even currently on sale at just $6.99 USD! I’ve been quite the fan of titles like this over the years. The Castlevania DS games really drew me into the genre and I’ve been playing them ever since. This entry in the Momodora series really scratches that itch. There’s goodies to find, bosses to fight, and items to purchase.

That and really, what other game do you play as a skilled archer who beats enemies down with a leaf melee weapon? It’s a good adventure to go on and took me about seven hours to wander through, get up my gear, and take down the final boss. The only thing I would have wanted is leveling up, which isn’t in the game, but that’s just because I’m a nerd for stuff like that. I got stuck the rare time, but with enough persistence and mixing up tactics I made it through.

Give the trailer a look and see if it’s a title you’d enjoy. I love the visuals!

Tags: MetroidvaniaMonodoraPlatformerPlayismReverie Under the Moonlight