It is that time of the year (For our Northern Hemisphere readers). The days are long and school is out! The sun is shining and….STEAM IS HAVING THEIR SUMMER SALE?! 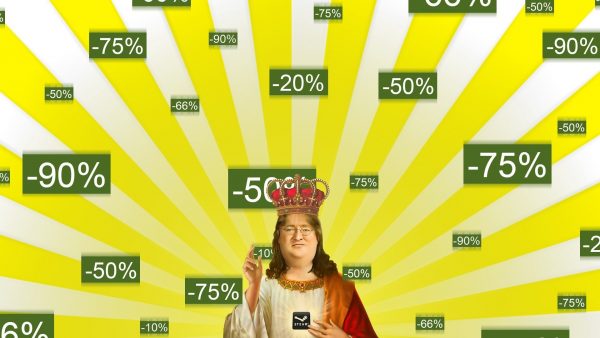 Okay, enough with the cheese. Let us get down to the meat and potatoes of this sacred occasion.

Throughout Steam’s Summer Sale, I will be reviewing games that are ripe for the picking. These games are hidden gems that I believe would be worth your time and hard earned lunch money. Some games will be new and some will be older titles, but all games will be on sale and that is truly what matters. So without further ado, let us meet our first contestant! 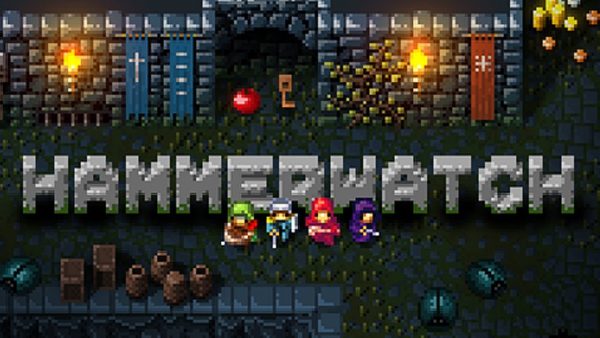 Hammerwatch is your Fantasy, Hack-n-Slash, Action/Adventure throw back to the days of old. If you ever grew up playing Gauntlet in the arcades, then Hammerwatch will bring back some of your childhood. You can choose between six classes for your pixelated journey in either a single player mode or up to 4-players. Each class has different abilities, along with strengths and weaknesses. In Castle Hammerwatch mode, you are tasked with finding a different route after being split from your party in order to reunite. Your ultimate goal; slay the dragon….and do not die. That one is sort of important as well.

The story of Hammerwatch is not complex, nor is it truly relevant. You start the game on one side of the bridge and the rest of your party on the other.

“The small bridge broke behind you…there is probably no way out!”

After you have wasted all your energy trying to kill your party on the other side of the bridge because it was probably their fault for the situation you are in, your adventure begins!

Make your way up through the castle, kill some mommy and daddy monsters, slay the dragon, and hope and pray you make it out alive. Simple as that

Thankfully, the gameplay is richer than the story. 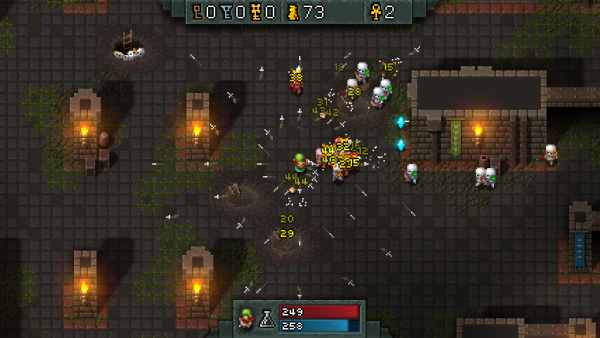 The gameplay is really fluid and just about any computer can run it. I used my Xbox controller while playing this. Using the keyboard was a little annoying and I did not feel like revamping the setup. What can I say, I like controllers.

Before you start your adventure, you choose between six characters. As I briefly mentioned earlier, each one has strengths and weaknesses. This graph will show you the different characters.

Each one is unique and an asset to any team, but if you go it alone like I did on my playthroughs, there is no better than the Ranger. I do not even like Ranger classes, so it is not about favoritism. He is just a solid character and will keep you alive and I was a new player, so I went with it. I tried playing Paladin and Warlock but I died a lot. More with the Paladin than the Warlock surprisingly.

After you choose your character, you have an option to choose Modifiers to enrich your experience. Modifiers are divided into Challenges and Crutches. Challenges generally make the game harder and increase the score multiplier, while Crutches make it easier and decrease the score. Using one or more crutches disables achievements from killing bosses. Enabling a modifier can grey out other modifiers if they are opposite to them or would not make sense combined. I did not use any on my run-through because I wanted the achievements but I may use them for other achievements that aren’t affected by using them.

Now you are truly ready to play!

You make your way up through the castle and the game is broken down into 4 acts, with each act having several floors to clear and a boss at the end of each act.

Monsters are plentiful, there is rarely a shortage of killing to be had, but I think there are more bushes, pots, boxes, and all around breakable stuff than there are monsters.

You do not become stronger by buying weapons or armor. You collect money from the monsters you kill, the destructables you pass, and upgrade your character at random Vendors throughout your travels. There are 5 Vendors in total. Each are as followed

What makes your journey unique is even if you break and kill everything and find every hidden place where there is money, you will never have enough to max out all the vendors. Let alone more than one. So you have to choose wisely and build on what you lack.

As the game progresses, the monsters get harder and trickier to kill. The mobs get bigger and mini-bosses will be around the corner to boost all the smaller ones to give you a real run for your money. Traps will become more of an issue and an obstacle to slow you down.

(A bit of advice, find the planks of wood. You can thank me later)

When traveling through the area, be sure to keep a lookout for secret rooms. These rooms are usually hidden behind cracks in the wall where you need to attack to up them up. Other times it will be puzzles that might have you running all around the map and doing a bit of back tracking to find and complete.

Each boss will have you mowing through your lives, so make sure to treat each life well before the boss battles, because you will need every life you get!

In Temple of the Sun, you arrive outside a few pyramids where a little camp of people are settled in at. The vendors you come across in the previous campaign are all now in one place. This is important later. The path into the pyramid is blocked so you must find another path, which happens to be under it. You will come across familiar monsters and new ones along your way.

As you travel, instead of the linear path that the previous campaign gives you, this one will have you returning to other floors in order to progress. They make this task a little easier by providing special orbs you can use on warp gates that will take you back to the camp. Now each vendor starts off at level 1 and the unique way to upgrade them is to find orbs (different orbs) to put in baskets near each vendor. This way you can build your own path and instead of only getting an opportunity when you come across the vendor, you can now upgrade at your leisure by warping back and buying the next level.

With more puzzles than the previous campaign and bosses that are a bit more challenging, you will have probably more fun on Temple of the Sun than Castle Hammerwatch.

The music and sound was composed by Two Feathers Studio, a studio geared towards video game music and design, led by Elvira Björkman and Nicklas Hjertberg. They have worked on a few lower end titles but their breakout is Hammerwatch, which put them on the radar. They now work on an upcoming game called Aragami: Out of the Shadows for the PS4. So they are a studio to watch.

My thoughts on the sound and music

The sound design was really well done. The sound of monsters being smashed, slashed, chopped, stabbed, burned, electrocuted, shoot, and destroyed were very satisfying. Everything synced up well and the retro sounds really showed in this game.

The music I have a little gripe about. Though the songs were large and powerful, signifying a grandiose scale, I felt like the variety was limited. The soundtrack isn’t large because you had one song for each act and each act could last a hour or more. Some of the songs did not seem like they were made for looping. You would be listening to the song and it would have an ending and then an abrupt loop back to the beginning. I mean, after a while of hearing the same song, it became white noise, but I hope they were not counting on us ignoring the music before the weird loop got to us.

All in all I did enjoy the songs they did make for the game, I just wished there was more so we didn’t have to succumb to the same sound for so long. 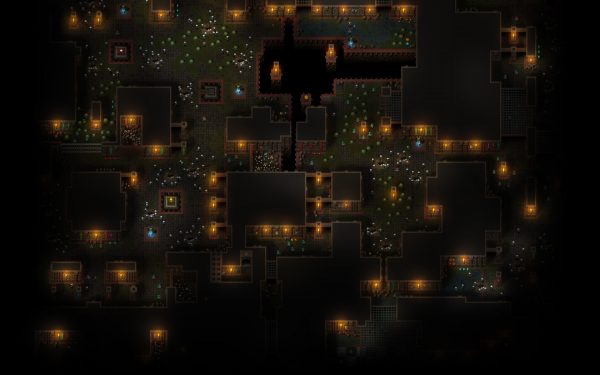 After you’ve completed the campaigns, you still have more options ahead of you!!

This game is very Dev friendly. If you want to design your own maps, you can can launch the Editor mode from your Steam library and then have at it! Too lazy and want to tackle others maps! You can do that, too! Granted, since the Hammerwatch community isn’t the biggest, it won’t be unlimited, so get out there and make some!

Still not enough for you? Alright!

You also have Survival mode, where unlimited waves of increasingly difficult monsters are out to end you!

Finally, if you want to truly live out your old school fantasies, you have an option to change the way you see the game. In the advance options, you can simulate the quality of an old school monitor and even the curvature can be edited.

Hammerwatch never felt like a chore to get through. The pacing was solid and the challenges were there. I played by myself through each run and it was fun, but I feel like I would of had a better time if I had others with me. Hammerwatch is worth playing with a few friends and with the main campaign clocking in around 7 hours (If you search for everything and break everything) and Temple of the Sun clocking in near 9 hours (same way), for the price it is worth investing in. There might be a few things you do not like about it here and there and that is okay, the game doesn’t take it self too seriously for you to care a lot about it.