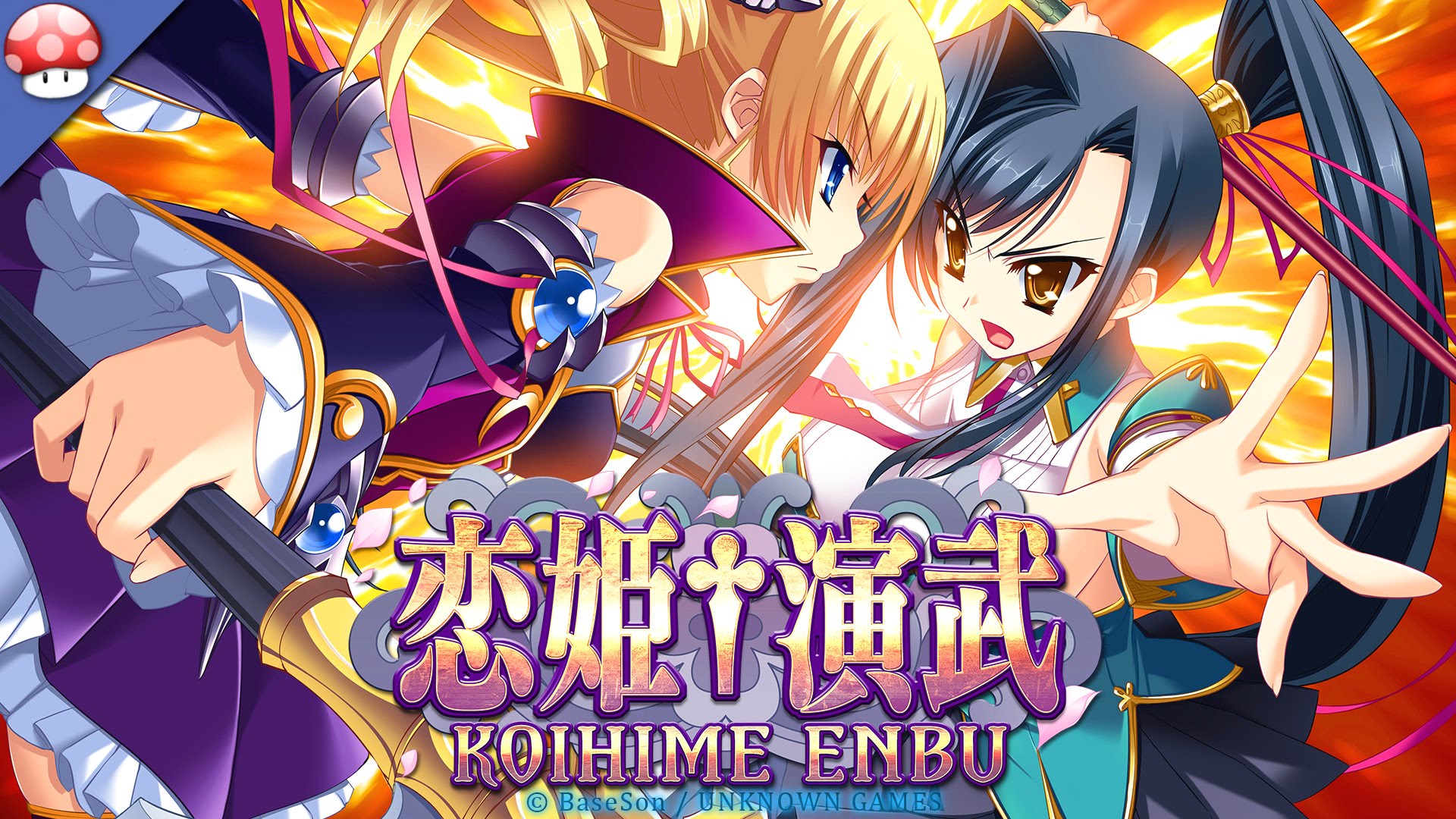 Koihime Enbu is one of those games that surprised me, I was offered the chance to review it by the publisher Degica and honestly was planning on taking a pass until I saw some of the still images that went with its PR packet. I am a huge sucker for cute girls, and this game is full of them. So I booted it up. I was expecting sort of Tekken vibe, and was rewarded with a satisfying and easy to get in to fighter that does lack some depth but is still fun. There is a lot here to explore and with so many really great characters to play, each of which has a unique visual vibe.  13 Unique fighters make the game feel fresh and diverse.

Full disclaimer I am not an expert at fighting games, I lose to all of my friends regularly in Street fighter, Mortal Combat, and Soul Caliber, so I am literally the worst when it comes to skill at fighting games. This became important when I learned that this basically a non-technical fighting game. While you can do air combos, blocks, recoveries, and even reversals, this isn’t Street Fighter 5. Air combos are really important at higher levels but you can play with out using them and still do all right.

The basics are pretty standard fighter, the characters are all girls, who come from a VN with the same name in 2007. The art style is absolutely beautiful, the colors are bright the models are alive. the stages are diverse. I can easily recommend this game just from its amazing art style. Each girl has a unique weapon and they span from generic swords to a set of heart shaped hoops. There is a lot of diversity both in character models and environments.  Each of the character models is technically 3d so you get some nice side effects as your characters move around and fight, but since they exist in 2D space these are more like hints of depth than any actual depth.

The game offers Story mode, arcade mode, vs, training, and online mode. I dove pretty heavily in to the Story mode, which is fully and beautifully voiced in Japanese with English subtitles. There is  a story but like most fighting games, the story is mostly about something you no doubt will not care about at all. Primarily it serves as a beautiful rest and transition period between the fights. I cant say i was at all invested in the story, or that I even played the VN this game hearkens back to (I don’t even remember 2007). The story is mostly fluffy and I am reasonably sure that I absorbed none of it at all, but it was very well voiced and each in between segment took several minutes to watch. 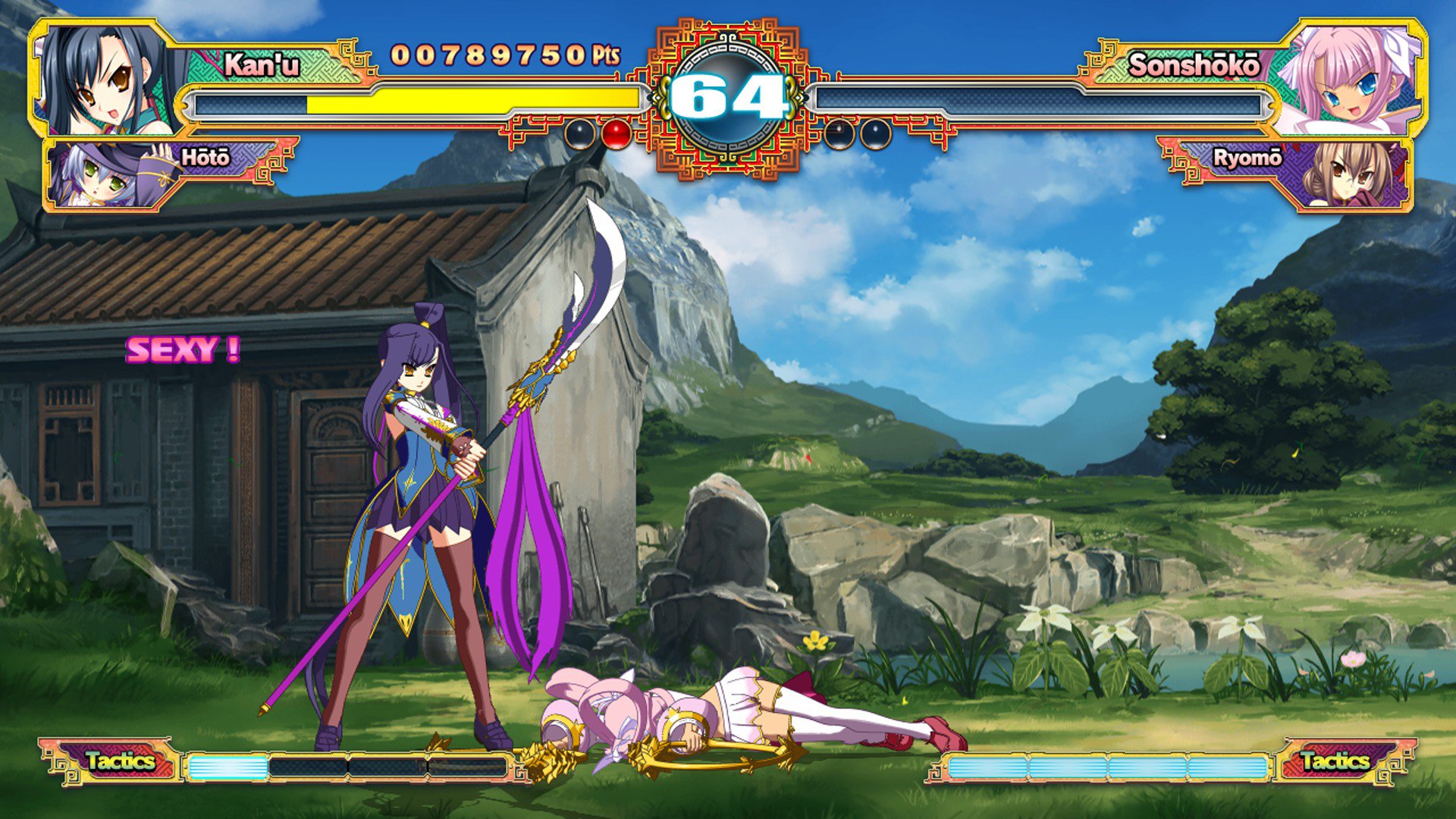 Enbu is a 4-button fighting game with 3 core attack buttons (low, medium and high), and another button being used exclusively for throws. The throw button can only be used after you hit a stun, The games simple buttons are nice for people like me who are not really very good at fighters with complex control schemes. This control scheme mapped well to the Xbox controller I was using. Each of the three main buttons went to X, A and Y, and grab went to B. The layout  felt pretty good, as my fingers spent most of the time pressing the two buttons on the left and bottom of the controller, and much less time on the right side, which for someone with small hands is harder to reach. The triggers are also used providing an easy press for multiple buttons. I thought it fit pretty well to use the Xbox controller even with its notoriously horrible design when it comes to fighting games. All of the buttons are mapable but I am not the type of person to spend any time remapping the buttons for comfort.

I spent the vast majority of my time in game watching the games  amazing character models move and attack and just exist in the games bright vibrant world. I was sorely missing the standard fighting game tutorial, but honestly this game does all right with just button mashing and skin of the teeth reactions. I will never call myself a great player of fighting games, and anime fighting games tend to be even more specific in their needed buttons, thankfully this game does not have that problem. Combos and special moves are the same set of buttons for every character. While this made me quite happy, I think many harder core fighter fans will find this lack of diversity boring. I like it because you can move across all of the characters with very few problems. Super and special moves are all executed via a simple combo of buttons and assist calls are done with just a single button combo (half a circle and the throw button). 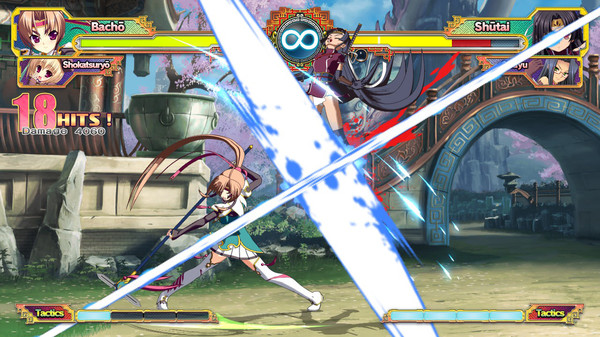 The game does lack the depth that you will get if your chosen fighter is say Street Fighter. But, for someone like me this is the perfect game to just jump in to and have fun with for a few hours. The game includes the necessary social and multiplayer modes. I dipped my foot in to them, got smacked in the face a bunch and decided it was not for me at all. However, if you like competitive online multiplayer, it does exist here. The one drawback of this being such a niche fighter is that since its launch the online community has taken quite a dip, and other outlets have reported that it can take over 10 minutes to find an online match.

If you see this game below its current price of $39.99 I would say pick it up. at 40USD I can’t recommend it unless you are a big fan of either anime fighters, or cute girls beating each other up, but if it was more like 30USD it would be an instant buy for me.  Make your own decision on this one based off of how much you really like anime fighting games.