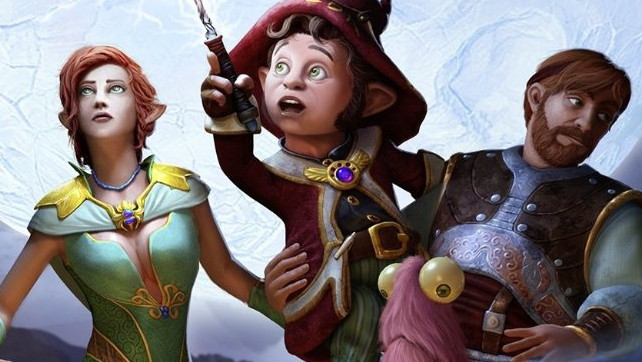 Every world needs its heroes. However unlikely they may seem. Join Wilbur, Ivo, Nate and Critter in another classic point-and-click adventure in the wicked world of Aventásia. Help them fulfill their destiny. A destiny as yet unwritten.

The Book of Unwritten Tales 2 is coming to the Nintendo Wii U on June 7th, 2016. The sequel and is a point and click adventure which was funded via Kickstarter back in 2014. The game was initially released on steam, but was ported to PlayStation 3, PlayStation 4, Xbox 360 and Xbox One were in September 2015.

A few years have passed since our heroes heroically defeated the arch-witch Mortroga. And their lives, like the lives of most people in Aventásia, are still in turmoil. The War of the Two Towers is over, but the wounds it left upon the land are still bleeding. The gnome Wilbur Weathervane is struggling with his new job as a teacher at the reopened School for Wizardry and Witchcraft. His magic wand is having a mind of its own and an assassination plot against the arch-mage overshadows the first democratic elections in Seastone. A darkness has fallen upon the land, or rather, a pinkness. A magic force is turning mighty beasts into fluffy plush puppies and towering castles into oversized dollhouses. Can Aventásia be saved?

The new adventure from KING Art, creators of The Book of Unwritten Tales, is a fantasy story with over 20 hours playtime. Solve hundreds of weird puzzles, meet an ensemble of quirky characters and enjoy an epic orchestral soundtrack.

The single player game will be released on the Nintendo Wii U on June 7th for $19.99 USD. The game, which will see a release in both physical and digital forms, is also listed on Amazon.ca for $19.99 CAD.