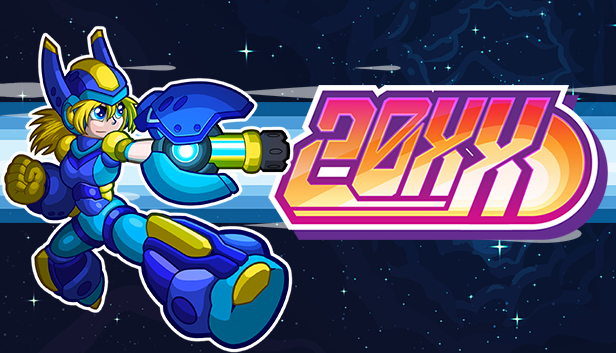 What happens when you take the ideas and feel of a Mega Man X game, add in random levels and powerups, a bit of permanent death, and a season it with multiplayer? You get 20XX, by Batterystaple Games. Bad cooking comparison aside, This game was designed by someone who absolutely loves the Mega Man X series, and it really shows. Even though it’s in Early Access on Steam, the version I’ve played (0.951b) is very solid in terms of gameplay and feel. From what it looks like, the development team is quite receptive on supporting and developing their game. It’s one of those games that have a neoretro design to it that any gamer from the mid-90s would feel right at home with if they were playing on a SNES or PS1 back in the day. Having played several of the Mega Man X series myself back then, 20XX is a really good callback to those days and is just as enjoyable without some of the frustration of a few of the later entries in the X series.

After getting though the tutorial, the game starts off with the player in Ark, the world hub. This gives gives the player numerous options, ranging from switching characters, choosing levels and challenge levels, seeing collectibles that the player has collected, even buying items for use with in-game currency. What was surprising to me was that of the two characters that are in the game, the default X-style character, Nina, is a female-designed robot which isn’t overly-sexualized. Ace, the Zero stand-in, is complete with the equivalent of energy sword as the default weapon. The shops that exist in the Ark, the game hub, and thoughout the game levels give the player the ability to purchase items that’ll improve stats like health, jumping ability, and the like, or other things like weapons. The in-game currency, known as nuts, can be found from defeated enemies or from broken crates. One thing to note though is that if one manages to progress later on in levels, items will become more expensive and encourages players to spend their haul earlier than later on what they want or need for playthoughs. 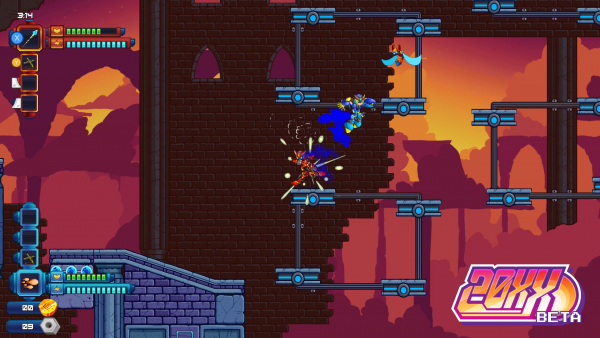 Double your fun by playing with friend!

Having played though several times, and thusly dying several times, permadeath sucks. For people not familiar with rougelike games, permadeath will force you to restart a game with a new character, and it one of the staples of rougelikes. This in turn makes players play the game a lot more carefully so they don’t just up and die relatively quickly and have to restart anew. To help make this a little more forgiving, falling into what would be considered death traps like lava or bottomless pits will only deduct health and teleport the character to the last safe spot. Playing though on Normal, the enemies are spread throughout levels, but not with an abundance that would be an aggravation. Besides being able to play on Casual, Normal, and Skulls, there are four challenge game modes as well. Split into two Daily and two Weekly challenges with the choice of regular or Hardcore, they provide additional variety to the game, but if one isn’t able to clear them, whatever challenge that isn’t completed will be locked until the next period of time. While going though levels, the length from the start to getting to the boss is a respectful amount of time, while not taking too long to do so. Boss battles are spectacular with their introductions, design, and attack patterns that aren’t excessively difficult to figure out. They can take a bit of time to defeat, but after the fight, the player can chose one free powerup, get prizes from the two chests, and spend some nuts on a slot machine for another item still and then it’s off to the next stage. In addition to everything, levels are timed, so players can also get bonuses for finishing the level with time to spare. As for multiplayer, I didn’t have the chance to see how well matchmaking runs, as I didn’t have much luck finding other people to play with just yet.

20XX currently officially supports the Xbox 360 controller, while other controllers are “at your own risk”, but since I didn’t have a wired 360 controller laying around, I stuck it out with the keyboard. That said, the game can be played with a keyboard with customizable controls, but unless a player is used to playing action games with a keyboard, it’ll take some time to get used to playing on. While I still have yet to find a good enough key layout that I can use to play very effectively, the key customization makes it easy to experiment with. Controlling the character is quite solid, with ease of use being able to get though levels and boss battles. Graphically, this game is on par of what would have been on any 2D side-scroller from the PS1/Saturn era, and the presentation is aesthetically pleasing. As for music and sound, it’s what is to be expected for a game of this style, and hearkens back to games of that time. My only real complaint with sound is that it seems that some of the sounds are of lower-quality samples that sound like that they’d belong in a small flash game instead of something like this. Even if this game is still in beta, it has a very solid design with a really good look and feel to the gameplay. Making this game a rougelike was an interesting, but fun choice, as I want to keep playing it though till I manage to clear though the levels and eventually the challenge ones as well. It’s a game well-worth getting into, Early Access or not.

20XX is available for purchase on Steam