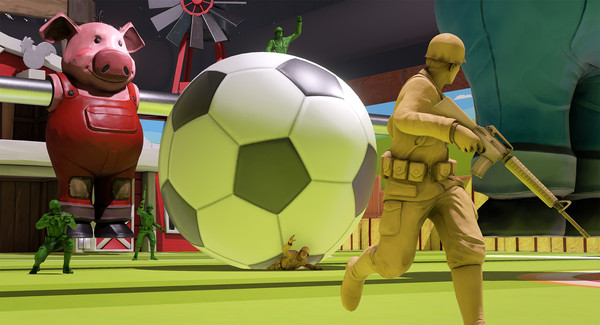 Developers Virtual Basement bring the childhood pastime of backyard warfare with plastic army men into the modern era with their Unreal 4 engine powered team death match shooter The Mean Greens.  This is certainly territory that has been covered by 3DO’s now defunct Army Men franchise on previous generation consoles, but no other title has made watching your plastic figure melting into a pile of goo like The Mean Greens has achieved.

Like the activity that some of us may have enjoyed in our youth, the premise of battles in The Mean Greens is quite simple – two teams of colored Army Dudes, Green and Tan – battle each other until one team is nothing more than smoldering piles of plastic bits. Combat takes place from a third person perspective, positioned just slightly over the player’s character. Firefights in The Mean Greens is fast paced and can sometimes result in some amusing death animations such as the soldiers exploding into pieces of plastic shrapnel when hit with a bazooka blast. While The Mean Greens offers 10 different objective game types often during online matches things simply devolve into a plastic murder fest until time runs out.

The Mean Greens give enlisting soldiers a number of different weapons to eliminate opponents. Each soldier is outfitted with the same kit and there are not customization options for load-outs or even avatar outfits. An AR-15 facsimile serves as the default weapon and is effective during mid range one-one-one encounters, a bazooka with a single rocket can turn the tides when running headlong into an un even match-up, a scoped Sniper Rifle allows trained marksmen to eliminate enemy soldiers from afar and a flamethrower allows soldiers to turn up the heat during a confrontation. All of these weapons feel like they belong in a skirmish consisting of plastic toys and they provide enough variety to make enemy encounters interesting enough to hold your attention for hours. 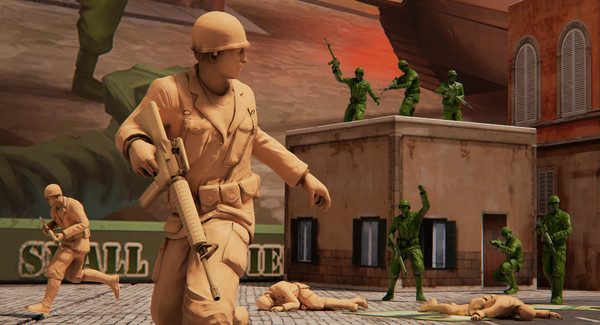 The arenas deserve a special mention for how Virtual Basement has been able to take the childlike imagine required for taking something as mundane as a bathtub and being able to turn it into a naval battle in the Pacific.  The version of The Mean Greens available through Steam Early Access offers 10 different maps that each have their own unique aesthetic, gimmicks and gameplay objectives. Standouts from the number of hours I spent playing the game include Bathtub Bash with its’ rotating carousel of rubber ducks and soap bubbles that  permeate the map, Kitchen Run with its’ fictional cereal brans & zip lines and Fish tank Frenzy  that comes complete with floaty water physics due to combatants being submerged in the tank. Clearly the art team that worked on The Mean Greens knows how to leverage the power of Unreal Engine 4 to bring a colorful & highly detailed environment to life.

The positive aspects of The Mean Greens leave a rather pleasant impression, especially after the first couple of hours but due to the fact that this is an Early Access game there are quite a few issues that potential players should be aware of. As of the writing of this review the server browser isn’t working as intended, many times the server browser will return an entire screen of available servers with zero players. During review I had more success selecting the quick match option then looking for a full server – the developers have said an upcoming patch will address this particular problem. Also some of the animations aren’t perfect on some maps – the aforementioned zip lines in Kitchen Run can sometimes cause the camera to clip into your soldier. 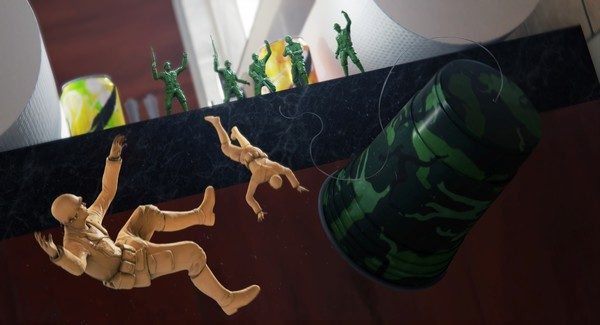 Virtual Basement had a ginormous booth with almost two dozen demo stations at PAX East where attendees could try out The Mean Greens with others. This was my first exposure to the game and I enjoyed it so much that I purchased the game as soon as I got home. If you can put up with the occasional graphical glitch and low server population you’ll find one of the most enjoyable TDM experiences that can be found in the non-AAA space on PC. Here’s hoping that more folks chose to enlist because The Mean Greens deserves a lot more exposure than it has got, for a AAA the currently available build is quite polished and enjoyable.