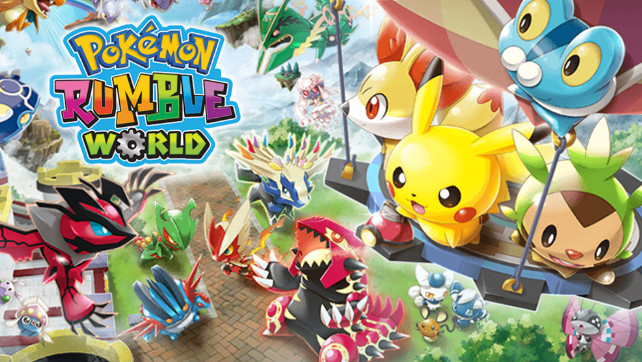 Pokémon Rumble World for the Nintendo 3DS was released as a free-to-start title in the eShop just over a year ago. Released on April 8th, 2015 the game finds players battling and befriending more than 700 Pokémon, including some that Mega Evolve! You’ll travel on your hot-air balloon and battle in 18 different areas with more than 80 stages. The more Toy Pokémon you collect, the more ways you have to defeat Toy Pokémon you’re facing.

The game now has a physical retail version. This new retail version contains all the same action-adventure gameplay, and is now available in stores at a suggested retail price of $29.99.

“We love giving our fans as many purchase options as possible,” said Scott Moffitt, Nintendo of America’s Executive Vice President of Sales & Marketing. “Players that love collecting physical games and all things Pokémon will now be able to add Pokémon Rumble World to their Nintendo 3DS collection.”

Using the StreetPass, SpotPass or “Call Someone Online” features (which, excluding StreetPass, require a wireless Internet connection), players can invite fellow players’ Mii characters into their castle town to assist them by providing helpful items. Players can even customize their Mii characters with outfits and a custom message.

This seems to be the exact opposite of what most companies do with games, but there obviously has been some interest in the game aside from the micro-transaction heavy concept of free-to-start games. If you haven’t played the game yet or are wary of micro-transactions for your child, this may be the way to go.

The game is available now in stores. Ironically you can’t purchase this version of the game in the Nintendo eShop.