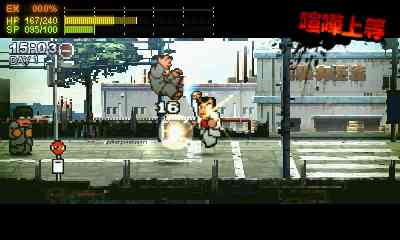 Developer Arc System Works and publisher Natsume will once again transport players to the world of River City with their upcoming release River City: Tokyo Rumble due out later this year. Building off of the classic NES side-scrolling brawler River City Ransom, Tokyo Rumble follows high school student Kunio and his friends as they attempt to defend the city from gang who wish ill will to the citizens of Tokyo.

River City: Tokyo Rumble will not only allow players to take on the role of Kunio and his friends but also those of previous heroes from other entries in the River City franchise. Players will be able to unlock new stages, characters and BGM as they progress – either alone or locally through wi-fi & download play.

Natsume will be showcasing River City: Tokyo Brawl at this year’s E3 which takes place from June 14th – 16th. Broken Joystick’s own Fionna Fox and myself will be on location in Los Angeles to bring you video, news and more directly from the show-floor. If you’re interested in more coverage of River City: Tokyo Rumble why not leave a comment!