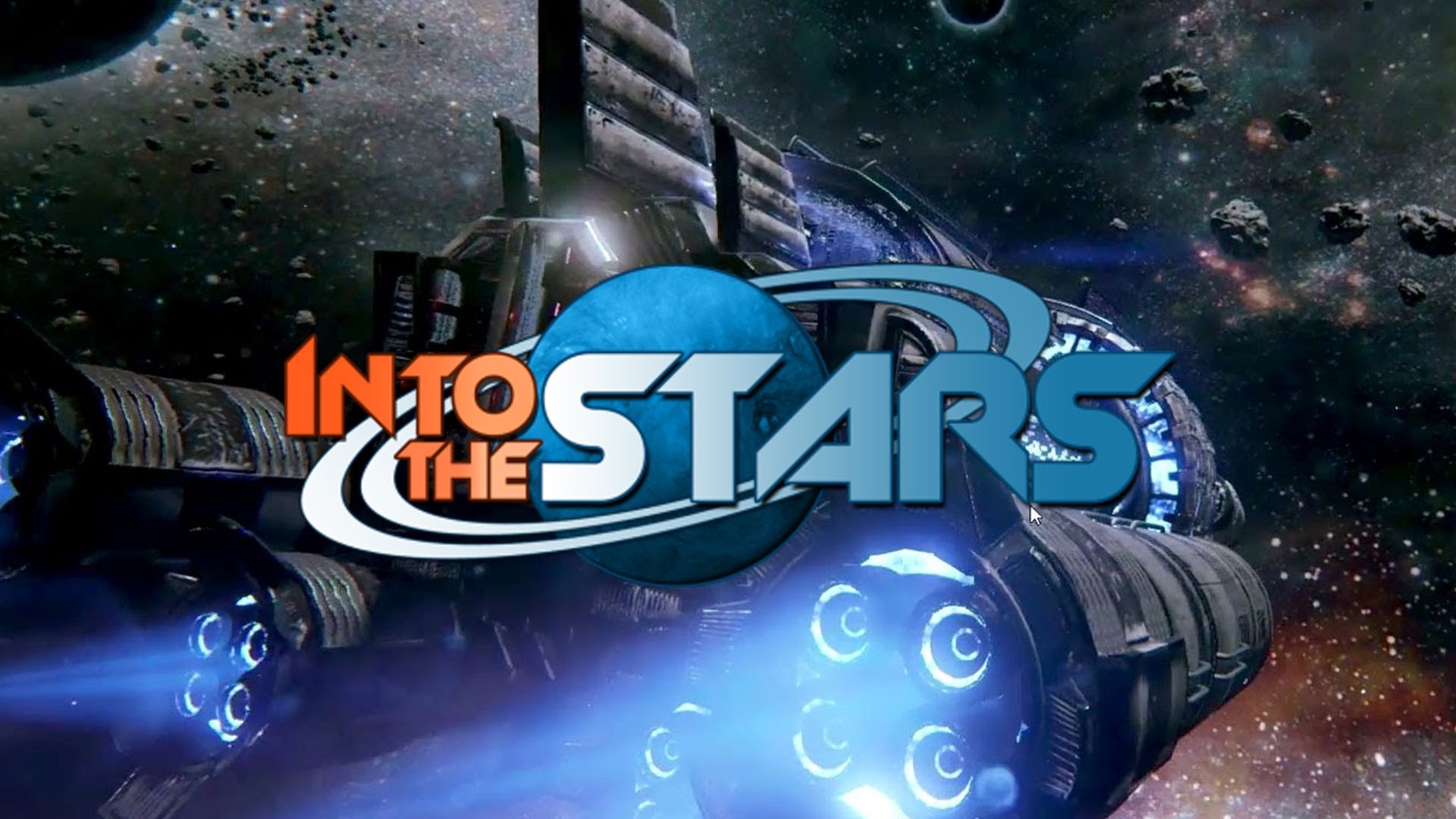 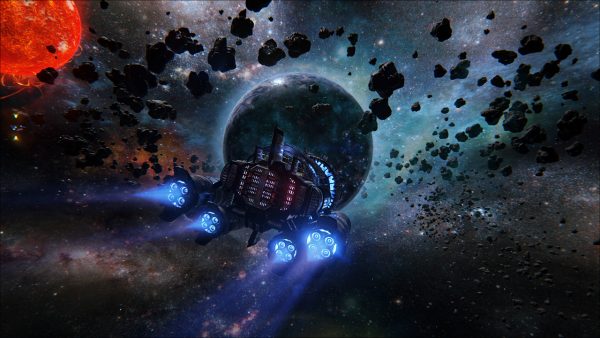 Word around the information super highway is that this little game, aptly named Into the Stars, is a hybrid of Star Trek Commander and FTL: Faster Than Light, but is it really? The people have spoken and the people are generally right. Into the Stars is filling the void of the lack of spaceship commander based games that are out there. With inspiration gathered from these games and mixing it with a collection of modern ideas and stunning graphics, Into the Stars is paving the way and breaking ground on a genre that has not been explored to its full potential yet.

Into the Stars is the first title to come out of the California based studio Fugitive Games and published by Iceberg Interactive based out of The Netherlands. With just a team of four at Fugitive Games, they managed to squeeze out some of the finest graphics in a space based game that I’ve seen from the Unreal Engine 4. Though, the level of artistry and talent comes at no surprise when mentioning the team behind this game. Being former EA DICE and Spark Unlimited developers means that this game should be held at a higher pillar than most. Some of their past titles they’ve worked on are Lost Planet, Battlefield, and Medal of Honor. If working on AAA titles wasn’t enough, they managed to get Jack Wall to work on their soundtrack. For those who do not know Jack Wall’s works, he is the man behind Myst IV, Jade Empire, Splinter Cell: Pandora Tomorrow, Lost Planet 3, but most notably from the Mass Effect series.

Like most small developing teams these days, Into the Stars was conceived by crowd funding through Kickstarter and surpassed their goal on January 16th, 2015 and by their last day on February 4th, they managed to raise over $110,000. By early July, they were Greenlit through Steam and up for Early Access. Now into 2016, their game is finally released, but does it hold up to the ideals they instilled in their 4,000+ backers and many others who helped through early access? 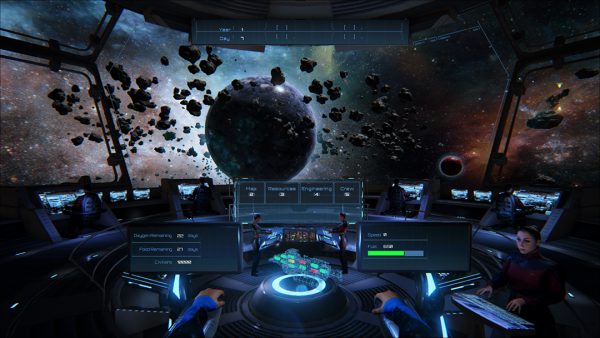 For the last 10 years, your race has been slowly picked off by the Skorn. Every 6 months, they come to your home planet and destroy everything they can, regroup, and return stronger than ever. In these years, your race has developed massive ships called Ark ships, but every time one is built, it is destroyed by the Skorn. In comes you, the commander of the final Ark vessel, Ark 13. Your crew of 10,000 people are the last of humanity. The catch is that your crew is also inexperienced. You must lead your crew out to Titus Nova, the last habitable place free of the Skorn. 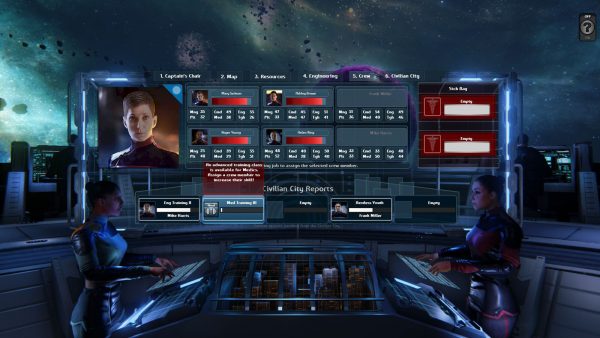 Into the Stars is an Open-World (eeerrr, more like Open-Solar System), Rogue-Like (Yup, you know that word means permadeath) pilgrimage of sorts. The warp-drive that you would normally rely on has been knocked out by a previous, off-screen encounter with the Skorn, so you must find the safest route to Titus Nova whilst keeping everyone alive. Oh and to make matters worse and to really lay on the pressure, if an alien race hellbent on eradicating you from this verse wasn’t enough, you do not have enough fuel, food, or oxygen to make it to your destination. So, you know, no pressure or anything.

Lucky for you, this star system is fairly massive and their are lots of planets to explore and gather resources so you can make it to your destination, but like anyone planning for a zombie apocalypse, if you stay in one place for too long, you will be found. Mainly by the Skorn tracking your signal and warping to your location. Be warned though, some areas have a higher threat level and you will be found out faster if you navigate in them.

As you pilot the Ark 13, you have a choice to view from the captains chair or out outside view. Taking a step back and viewing your surroundings is aesthetically pleasing. The developers really did a good job making a vast and gorgeous environment. You will be spending the majority of your time though in the cockpit, but make no mistake, the view from there is just as good.

Before you start the game, you can outfit your ship to your liking and to micro manage the work load, a random generator will spit out a list of crew members for you to pick from. You may choose six members to join you along this mission with each one having strengths and weaknesses. It is your job to figure out what crew members would be best at certain jobs based off their stats in categories like Engineer, Pilot, Medic, etc.. Over time, the crew members will improve and better with experience. The idea of having members worrying about the small stuff as you focus on keeping everyone on track and ALIVE!… is a nice touch. 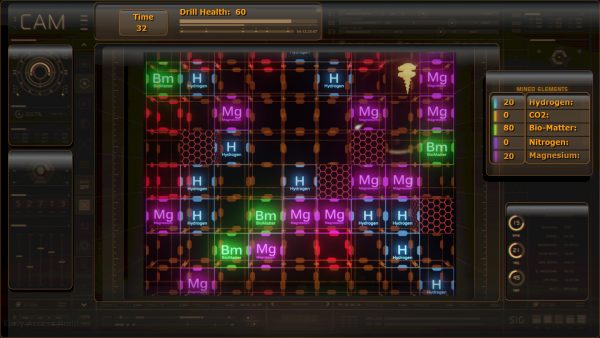 You have 90 zones to go through and your job is to find resources to make it to Titus Nova. The biggest haul for resources is on planets and there are three ways to obtain these resources. First off, remote probes. This will sift through the surface of the planet for any and all kinds of resources. The second method is to mine for your resources. This will require you to send two crew members to the surface to mine for specific resources you may be looking for. This will spark a drilling mini-game that is rather fun. Lastly, you can accept missions that range from odd ball jobs, to space races, to exploration, and so on. This will take your whole team off ship to work on the mission. Sadly, you (The Commander) do not get to leave. You are the opposite of Capt. Kirk. No karate chops or bangin the locals. Your mission is to survive or go down with the ship.

Space is vast but your stellar neighbors is close, so within the 90 zones, you will run into old ships (like your past Ark’s) or with other ships looking to trade resources. Even run into random phenomenon that you can capitalize on.

The Skorn will eventually catch up to you. You can map your course in all the safest zones but you will eventually be caught. The battle system is a little lackluster. Each ship has weapons and shields. You must choose either or. Each ship has three different color auras surrounding it that you must avoid firing that color weapon towards it. If you fire at a ship with a red weapon and the Skorn’s ship is outlined in red, it will do no damage. The enemy cycles through red, yellow, and blue so you must act quickly and decisively. Luckily, you have this power as well. If they fire a yellow weapon, you can shift your shields to yellow to nullify the damage. Your ship has to charge its weapon so when this is going on, you have to choose whether to deflect or evade the attack. Once you master the perfect technique in these fights, then you’ve mastered pretty much every fight.

During the game, you have a time limit which pressures you to rush and mess up, but before you start, you can decide to take the Explorer path and get rid of the pesky time limit. This will let you enjoy the journey a little more. 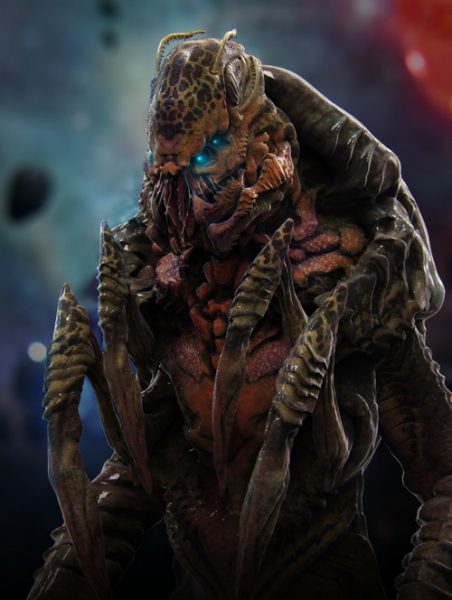 Into the Stars is a beautiful game and entertaining at parts. The ideas they put into this game makes it feel like you are actually on a ship trying to survive. One of the key features I liked was one of the ways life tries to drag you down. If it isn’t the lack of resources slowly killing you or the Skorn trying to tear you to shreds, it is your crew themselves. Problems will arise in your city like a gang forms to rebel or some disease is sweeping through. Your job is to boost the order, their health, and keep them happy in these dark times.

The graphics are vivid, the premise is promising for future prospects, the combat is a little weak, and the scoring is wonderful. If you get a chance to try this out and love FTL, this will keep you satisfied!