Mushroom Wars, the acclaimed PS3 strategy game by Creat Studios, has made its way to PC.

On its surface, Mushroom Wars comes across as a cutesy game that might be better suited to children than adults, with a simplistic art style and user interface. You’d be wrong to approach it this way, as the game is deceptively difficult. The game begins easily enough, with competent tutorials explaining the game’s mechanics, but rapidly becomes a tough, pure RTS experience.

The basic premise of Mushroom Wars is that you command an army of mushroom people, tasked with defeating a rival army, generally by capturing buildings. Captured buildings produce troops, and can be upgraded by sacrificing a number of troops to produce more at a faster rate. Each mission takes place on a static map with no scrolling. 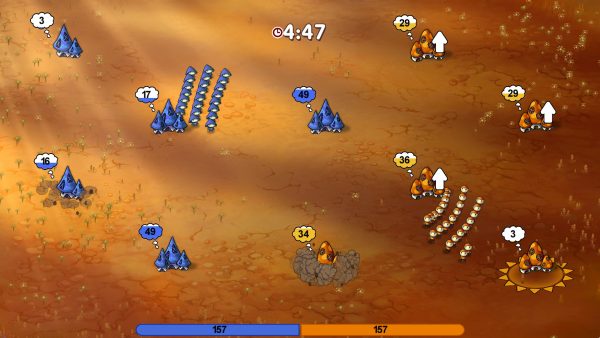 As the game progresses, it introduces more concepts to the player (such as different buildings, or objectives etc). This is done gradually and so never feels overwhelming.

Throughout the game there are several animated cutscenes that help progress the plot of the game. No dialogue is spoken, and the style of the animations fits it well with the rest of the game. I found myself sinking far more time into Mushroom Wars than I had anticipated. Later missions in the main campaign are quite tough, and require a solid tactical approach. The game, despite its simplicity, it’s extremely addicting and is a great addition to the RTS genre. It’s clear that Creat have focused on making a strategy game that is as pure as possible.

The game’s options menu is limited, covering only aspect ratio, resolution, windowed/fullscreen, v-sync, and music/sound effects volume controls. While this is usually an issue in PC games, due to the nature of Mushroom Wars, not much more is needed. The art style is simple yet pleasing, and the music is pleasantly relaxing. The UI is fairly uncluttered, providing all the information you could want without dominating the screen.

Ultimately, Mushroom Wars is simple on the surface, but challenging enough to scratch your RTS itch. The game comes with a campaign, a skirmish mode, and multiplayer is promised in the future. Coupled with Steam achievements and trading cards, there is plenty here to keep you entertained, and is well worth the game’s asking price.

Mushroom Wars is available on Steam and costs $9.99