I had the joy of getting to test out the Fantasy Grounds program on Steam, specifically being able to GM a mini campaign, and I knew this was going to be a blast. In the past I had GM’ed a decent number of games, from D&D 3.0 to Pathfinder, to Mutants & Masterminds, to oWoD, to… well you get the idea.. sadly when it came to online play, it normally ended up being IRC with dicebots and an updated every few minutes Paint .img (yeah, not as old school as mud’s, but still pretty old) 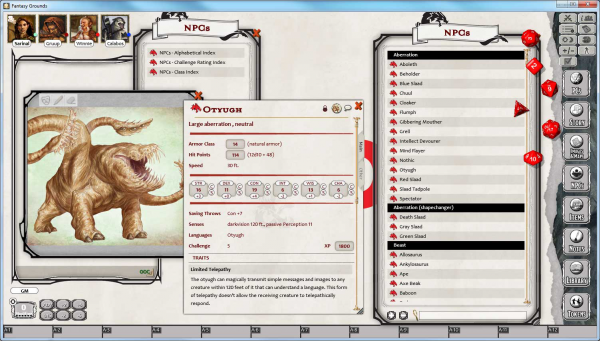 I went in to the program with pretty high hopes and was not disappointed. The layout is very easy on the eyes, not cluttered as some programs tend to be, but how easy and intuitive the program is overall is amazing. To the side is a bar of common things, such as PC sheets and a Library for looking up and loading various rule sets for Players, and GM’s have those in addition to Story, Maps, NPC, Items and Notes; allowing you to look through story bits, maps, NPCs, and Items to view, edit, or create things for the campaign, with Notes being a nice big notebook for each campaign. Along the bottom is a row of dice for easy rolling, simply drag whatever dice you need into either the chat, or onto an enemy/object on a map to declare the results. Also on the bottom is a hotkey bar so rolls that might take a bit to set up can be saved for very easy access. 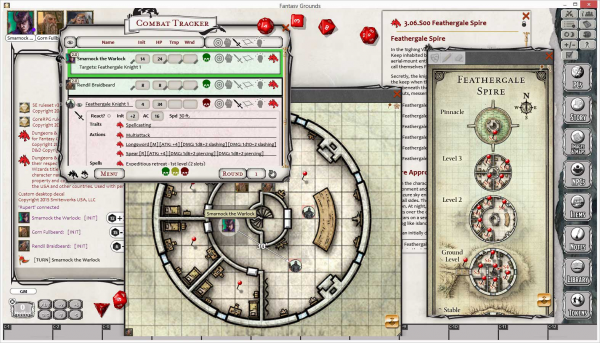 Where this program really shines though, is in its automation: In each character sheet, be it PC or NPC or enemy, you are able to do many rolls with a simple click and drag. Want your Fighter to attack a Kobold? On your sheet is an attack (and a damage) blurb that you simply click then drag to the Kobold on the map, it auto rolls your attack and calculates it against the Kobold’s armor, then states if the attack is a hit or a miss (showing the roll in chat, of course), then simply do the same with damage, which it automatically deducts from the Kobold’s HP. The whole thing allows you to be focused on the story, the battle, the *gasp* role-playing! (ok, side note, but the enviromental lighting change, being able to tint your and the players screens a specific color to highlight night, being around a campfire or in a forest, is one of the coolest things ever)

In addition to the awesome things it does for DURING the game, it does equally awesome things for a GM in setting up the game and campaign. Not only does it have TONS of content which can be bought and downloaded from the site, but it allows you to create your own content incredibly easily. From creating some new enemies (including setting a token image to them) to new gear (I LOVE making custom magic gear for my campaigns!) to using your own maps (with an awesome little tool to set how large the grid is for moving around on it) to, and probably the most amazing, setting up push-pins to link specific rooms/areas/events to story events (no more having to have a few windows open on “if they does this, this happens” notes, just have a push-pin for each room and click on it as they explore), this program has it all. 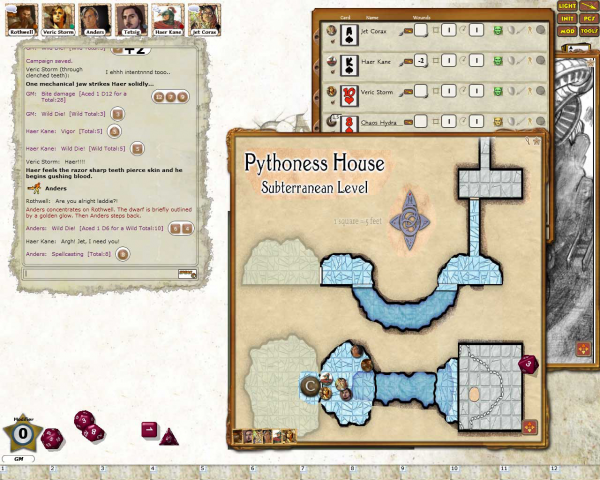 And now a change of Narrator:

Hello im fionna fox, and I have never played D&D before. Tonight I got the chance to play (with the help of fantasy grounds) my first ever mini campaign with Espy, Erika, and Rae. Going in to this the most knowledge I had of D&D was basically what I had heard in highschool and what I knew from random people telling me things. So basically nothing.

In order to better understand what the hell I was doing I called upon an experienced Dungeon Master (DM) in the form of Espy who had run several campaigns in the past. She assured me that I would just have to “play along” and that the game would do the rest.

So in the more than capable hands of Espy, I plunged in. for our mini campaign we had three players “against” one DM whom I would later learn to was quite cruel in her application of all types of various baddie and traps in order to try and kill us. So I chose the “archer” sort of character because I always liked playing with arrows and hitting things, and went in as blind as could be.

I expected quite a bit of dice rolling to happen, but in reality it was mostly in the first turns just us moving around and seeing what was right in front of me. The Dungeon Master tools gave Espy the ability to lay out all of her story text on prompts if she wanted, but I dragged all of us in to skype because I could and I thought it would be fun.

So with Espy on the mic we started our adventure, we were outside a dungeon which we were to clean out of its infestation of nasties. The first room held a foursome of kobolds (which I am told is the lowest form of enemies) our team of a warrior, a wizard, and a ranger (me), cleared these out quite quickly. After we cleared the ones that we had could see Espy revealed the rest of the room, and we went from there. Her DM tools allowed her to draw on the map the areas that she wanted to show us and leave other areas blank.

Combat was a breeze, each of our character sheets were rife with stats and things that I had no idea what they meant, but Espy was just able to direct me to click on a various thing, for example if I wanted to attack I would click and drag a dice that was in the weapons area on the character sheet over the top of the monster I wanted to attack, and the game would roll and calculate damage for me. Mostly for me it would calculate misses, and then tell me that I was bad at life. 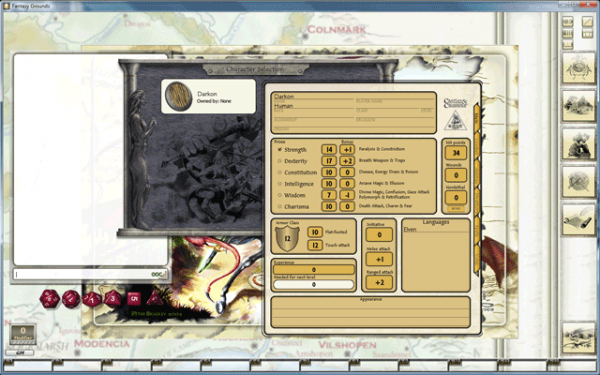 When damage was done to me Espy would simply tell me how much damage the game said I took, all calculated based on those mysterious numbers on my character sheet. It was honestly the best way I could think of to let me play Dungeons and Dragons and not have to learn any of the complex systems behind it.

Fantasy grounds made me able to understand what it was like to embark on an epic D&D campaign with out having to do all of the paper work. I really think that’s where this games strength lies, in its ability to bring together the strength of the DM who tells the story with the fun of playing a game, so you dotn spend all of your time doing math.

Over all I love the experience of playing Fantasy Grounds, it was enjoyable and easy to get in to. Espy tells me that it has many more under-the-hood options for DM’s and that its not as transparent as it is to the players, but that its still WAY easier to do than it would be on paper.  Perhaps than the advantage of Playing Fantasy Grounds over say paper D&D is not that you get to play with people who are not local (this already exists on multiple sites) but the ability to bring new people in the fold of the game, by removing the major intimidation factor that sometimes comes with something that has so many rules and so much paper.

Fantasy Grounds can be bought on Steam, or their site fantasygrounds.com (which has one-time pricing and subscription prices)