This is a new series of short articles that I will be doing based on currently airing anime on Crunchyroll.com! if you’re interested in any of these anime you can get a 15 day free trail to Crunchyroll to watch any and all of them! Fair warning each of these pieces will be HEAVY on the spoilers so if you haven’t seen any of the shows make sure

Depending on user response this will probably become a regular feature for this first one I have decided to feature three anime, Terraformars  Revenge,  The Joker Game, and The Hundred.

Fair warning spoilers will be ahead so click the read more to go on!
Click here for 15 day free trial to Crunchyroll where you can watch all of these anime we are reviewing. 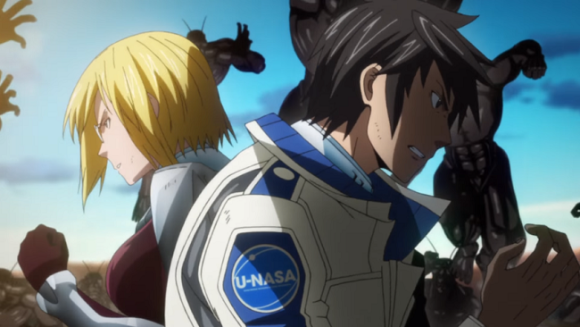 Terraformars is an ongoing show which last season was perhaps most famous for its censorship controversy and how it handled the extreme violence depicted in the show. After the first three episodes (when the shows plot started to ramp up) people began to complain that it was difficult to even tell what was happening during censored scenes, which were censored in a standard way by placing a black matt over the blood or gore. Crunchyroll made the decision to air both the censored and uncensored episodes and allow viewers to choose. Now season 2 has arrived. When last we left brave protagonists they were about to face an overwhelming amount of roaches and all seemed lost. Season picks up in the middle of a fight that was ongoing and my how things have changed. If you really loved season one of this show, I would suggest you not waste your time here. I was concered about the show when they announced that the art staff would be changing, and it seems my concerns were warranted. The shows tone has changed significantly, with a heavy shift to shounen style hand to hand combat, and the apparent removal of all of the shows trademark gore.  I wish the show hadn’t taken this path, but with the success of the recent one punch man series it seems like we will see many, more of this style anime in the future. Overall I rate this a 2/5 the change in art style is too much to get over, the characters even look different. The whole anime has changed tone from a gritty dark survival story to a colorful happy shounen style. The brutal punches dismemberments and kicks of last season are replaced with the flat sounding bland hits that are have no feeling behind them. If you loved last season I say pass on this one, if you are just starting and like shounen beat em ups, give it a try. 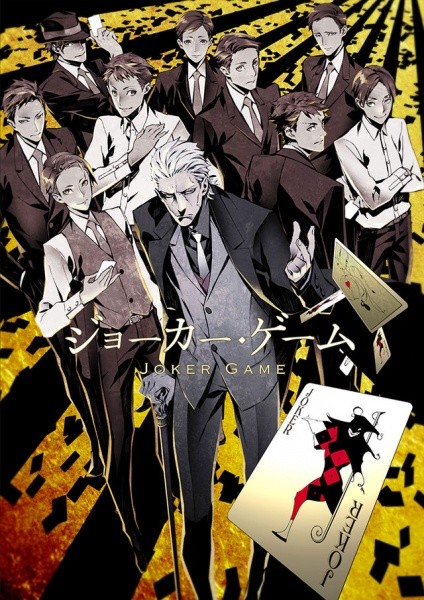 The Joker Game is a brand new anime from Production I.G. (attack on titan, Psycho Pass, GITS) directed by Kazuya Nomura (Robotics:Notes) so it has quite a pedigree behind it. I think the I. G. name alone would have been enough to get me in to the first few episodes of this show, and the addition of the military angle plus it being during World War 2 really peaked my interest. Unfortunatly the first episode ended on a terrible cliff hanger, but so far what I can tell you is that this looks to be mostly a character drama. Perhaps as a nod to the drama, the series follows The “D Agency” a secret group of non-military Japanese people who the military will train to become elite international agents of espionage. The first episode does even start to get us to the main story which will follow Jirou Gamou who is one fo the D agency spies as he goes on a mission to recover the black notes. Though we haven’t gotten in to the main story arc yet, even the first episode is full of drama intrigue and amazing moments. We get to see where the agents came from, as well as a where the title come from, finding out that the D agency’s mission is to spy on a global scale, and during this episode they train for it, and we get a few amazing hi tension moments, the first is a poker game, where the objective is not to have the best hand but to get the people in the room to spy for you and tell you you’re opponents hand.  The whole show is layers on layers on layers of human drama and amazing art. I can already tell that this is probably going to be one of my favorite anime of the season, even though I strongly prefer action over character drama. The first episode alone is a brillany introduction to the characters of D agency, Imperal Army Lieutenant Sakuma is sent by the home office to supervise the new agency, and is taken aback by how lose the rules are. Coming from a strict military background his whole world view is different. Sakuma belives in fair play, but the world of spies is anything but. So far 5/5, it’s way to early to say anything about the story this show will eventually have. Production I.G. have knocked the art out of the park on this show. The tone is dark earthy and very realistic, IG as always is delivering top notch animation and I expect this show will be no different. As of right now im all on the hype train, and cant wait for next weeks episode. 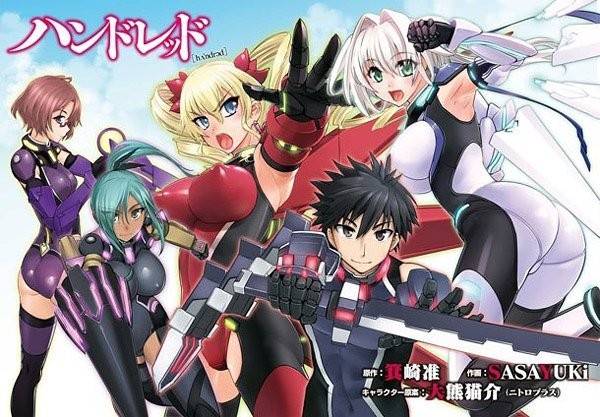 I thought hundred was going to be my guilty pleasure this season (and I wasn’t completely wrong) the setting is so generic it actually reads in summary “The ultimate academy battle begins here!” and we have all of the elements of your basic Saturday morning kids anime, mecha-type armor, a generic protagonist who is supposed to be the “ACE PILOT” an antagonistic alien force that shows up and the last hope for humanity is our ace pilot. It’s all here all the tropes, all the basics all the white bread and bologna stereo types, that you could ever expect from an anime. The studio behind it isint even a great vetran of combat oriented shows having mostly done slice of life shows like Wake Up, Girls! and DRAMAtical Murder. Yet, I found myself watching it. I knew what I was in for, and I still loved it.

We start this adventure off with a tragedy, our protagonist Hayato is seen as a young child his town being attacked by the Savage (the shows generic aliens) the protagonist then wakes up from this nightmare, and we see that we are headed to the “school” which is actually a floating battleship academy! It’s literally play for play generic anime opening, nothing different or interesting at all, but don’t turn it off yet!

Arriving at the academy called “Little Garden” Hayato stirs up trouble right away being tackled by a beautiful person who turns out to also be his roommate who is also a girl dressed as a guy! (im sure this will continue to play as a joke it was mentioned at least 5 times in the first episode) Shes super excited to see him, because he has the highest ever compatibility with the “hundred”  so with in the first 10 minutes of this show, we got our tragic backstory, our academy full of super powered teens, our cross dressing roommate, and our ace pilot, oh and also a little back story on what the Hundred actually are. Yah it’s a lot to process in a very short time.

Of course we can’t just have an intro episode, we need some conflict so at the all school assembly for the start of term Emily (the cross dressing roommate) stands up for two girls who are late, and were going to be expelled. Since Hayato feels a sense of duty to his new roommate, he too stands up for the late girls, and the result is the president challenging him to a duel. The rest of the episode is mostly Hayato receiving his unique hundred, and learning to use it, as well as one fan service shot of Emily just out of the shower.

Overall I have to say this show has earned its spot in my watching queue on crunchyrolll this season. Its pretty generic, but I love it. The hundreds look a lot like the mecha from Infinite Stratos, and the way they are used in combat seems kinda similar (skin tight suits with flying add ons). Assuming the animation in the fight scenes is good and we get some semblance of story to go with the academy setting im probably going to stick with this one all season. 5/5 currently from me.

You can watch all of these Anime on Crunchyroll! Why not try out a 15 day free trial!