Space Grunts is a lovely little game available now on Steam for PC/Linux/Windows, the Humble Store, Apple’s App Store & Google Play. For this article I reviewed it on Linux. The game was released cross-platform at the end of February. The one-man development team, Orange Pixel, has a track record of creating simple cross-platform action games. This game is similar to those in of its action-oriented screen shaking chibi-pixel style. It is unique, however, in of that it’s a turn based rogue like with a light strategy bent.

Like its predecessors’, Space Grunts is a straightforward game at face value, with three moderately unique classes to choose from, dropping you right into alien stomping action. As a full-on rogue like it features a wide variety of items, enemies, traps and variations on each. The dungeon is randomly generated, only saving your progress at the beginning of each level, but your ‘save’ is deleted if you die. Further, the current level regenerates upon loading a save. This means that save-scumming is pretty much impossible, which lends some credibility to the global leaderboard. If you can’t crack your way into that, there’s also a daily challenge with its own, daily, leaderboard. The game is glossed and polished extremely well, setting it apart from many in the genre.

In addition to the general polished feel, the game sets itself apart with the action heritage of Orange Pixel’s other games. While Pascal Bestebroer’s (Orange Pixel’s sole full-time developer) other games may not normally be turn based, they are all solid mobile adaptations of existing genres. Their past games have included Gunslugs, a run ‘n gun, Heroes of Loot, a twin-stick dungeon crawler & Groundskeeper, another run ‘n gun. All of these appear to have tapped the same team for art and music as well. Similarly, Space Grunts can be played quickly and is good for a jam session on the go. While this is unlikely to get you into high score territory, it’s fun and refreshing. The controls are simple, inventory management and character development are very light and mostly automatic. You can play with a joypad, keyboard, mouse and of course on mobile devices’ touchscreens. Played quickly, the game feels more like an old top-down shooter, such as Alien Breed, than a rogue like. Gameplay immediately reverts to a slower turn based rogue-like, however, when you’re faced with a challenging room.

Levels in the game are, thankfully, split into sealed rooms. Each room requires you to open the door before the monsters, turrets and NPCs come alive. This allows players to pace out the action and approach each room as its own unique puzzle to be beaten. A perfect puzzle-like assessment is impossible as a monster’s health is unknown at start and slightly random without an extra, turn limited, in game item. This means that there is an additional element of chance beyond just the loot drops and enemy movements, which I found refreshing over number-crunching. 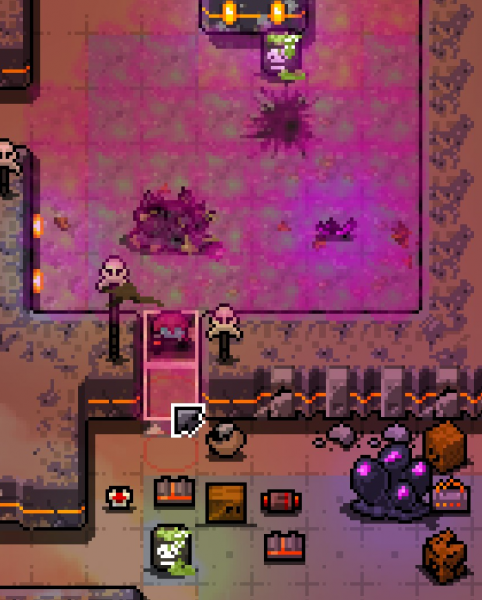 Why not both? Poison and healing spores.

With perma-death and no saves for old characters, you’ll be starting fresh frequently. The game doesn’t make this difficult and accepting that is part of the fun. Each play through is a chance to get further in the dungeon, or see a new hidden area. There are plenty of types of areas too, each occupying several levels and having unique challenges to it. Some are hidden behind destroyable architecture in the game, others caused by activating a found item. Lots of things are breakable, dropping loot or exploding in unique ways, even rooms can be reshaped by explosions. Despite the wide variety, I’ve yet to see an area that is simply unbeatable. It’s conceivable you may find an acid covered floor you can’t cross without boots and be unable to proceed. Some destructible elements are fairly unpredictable too, such as crystal flowers that can either heal your or irradiate a room. That said, I haven’t seen an area which careful tactics, experience and critical thought can’t manage. This is a hard balance to achieve with random dungeons, and again that polish is where the game shines.

Exploration is a joy, taking things one room at a time. Some levels are fairly linear while others amble about with hidden bosses, and dead-ends. Some rooms seem to have pre-programmed archetypes. For example, there are rooms made entirely of flame grates firing in random sequences, almost always with an item in the middle. Being able to learn how best to navigate each room and when to use your items is essential. The items are almost never permanent, minus some stat upgrades and detectors. This makes almost everything ephemeral and takes some of the bite out of a character’s death, which in this case is probably a good thing. Characters dying so quickly, it’s reasonable that there’s no way to make permanent progress ‘developing’ them.

I’m not showing what level this is from, because it’s embarrassing.

There are, by the way, only three main character types. Each has a unique variation on three main attributes: strength, tech and luck. These are respectively the character’s brute damage and hit points, ability to fully utilize new items, and likelihood of finding items. The characters’ types of “captain”, “strongarm” and “techjunky” don’t quite translate into the rogue/fighter/mage roles you’d expect. They do come close, though. All character types start off with the same three weapons, but are able to use each to different effect. There’s only four main weapons in the game, the three starters plus a crowbar mostly good for opening crates you find later on. Weapons can be upgraded via random drops, and there are limited use weapons such as mines, RC robot bombs and flame throwers. Other drops run the gamut of possible upgrades, one off ammo-burners, regeneration items, time stoppers, teleporters, practically anything you can think of. Ammo packs and health packs are used immediately, so it’s sometimes wise to skip around the health packs for backtracking within a level.

There is some permanent progress to be made in the game. In addition to leaderboards and daily challenges, there are data cards revealing backgrounds on each enemy, a Moonbase Log updated as your characters proceed further into the dungeon and meet NPCs, statistics about your gameplay, three unlockable ‘skins’ that are actually more powerful characters, and plenty of achievements to reach. These synced across systems for me in Steam, I can’t vouch for Google Play but I assume it uses the cloud sync there as well. Proper support of ‘cloud saves’ has been on the uptake in games, and it’s lovely. I only wish there were ways to sync from Steam to the mobile app stores and vice versa with games like this. All of those extra numbers and items, in addition seeking the final boss of the dungeon, gives you plenty to rank your game mastery against.

The graphics are a solidly modern take on pixel art. Which is to say, pixelated but not retro. The effects and fog-layers are often high-resolution and 3D, glowing light sources and reflections abound. Your character even leaves little ephemeral foot prints. Effects and animations in the game run constantly, somewhat masking its turn based play. I see the style of the characters & mobs as anime influenced, with that big-headed chibi look to them. This look is in tune with the restraints of mobile screen sizes but still reasonably fun to look at on a bigger PC monitor. The music is similar, good, easy to listen to, but not overwhelming. A series of slick bubbly techno-ish tunes played over the ambient noises of machines in the dungeon and sound effects. The music neither grated on my nerves, nor made me pause to listen. I’d say only slightly better than average in this regard but it fits the game well and doesn’t sound like stock effects. 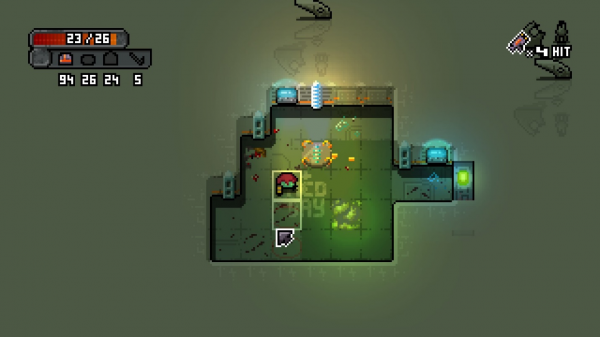 Despite having a one-man development team, Orange Pixel maintains proper community forums. They are very active on those and release frequent bug fixes and updates to their games. I have to say I’m impressed. I’ve seen plenty of better funded developers not do nearly as well by their fans.

The game also doesn’t “feature” in-app-purchases. Once you’ve bought it, you have the full game, regardless of platform. Prices vary between mobile and PC, which is frustrating even if it is standard practice. The PC version is the most expensive, at $9.99, while the Android and iOS versions are $3.99. It is nice to see Android & iOS at the same price point.

Are you a fan of Nethack or Rogue like games? If so, are you looking for something mobile friendly, more accessible and modern? Then this is a fantastic choice. If you were let down by “Steam Marines”, or if you want more of the same, definitely consider this game. Space marine alien stomping is one of my favorite themes and Space Grunts pulls off the ambience of it well. The graphics are slick, the music fitting and the gameplay tight. It isn’t a rich, beyond-expectations game, but it is clever and well made. It feels absolutely worth the price. Especially if you like the genre or want to try something new on mobile. Orange Pixel has been around for a while now releasing these well packaged, small games. Their experience and style shine through.