Home / The Culling is everything King of the Hill should be

The Culling is everything King of the Hill should be

Have you ever wanted to feel like you are in the Hunger games? Yah, me either, but I always thought it would make a cool video game. The culling starts off sounding like it’s just another king of the hill style combat game with some light crafting and exploration, but its managed to win over my heart because it’s so much more.  A rock-paper-scissors style combat system, the scarcity of firearms, and the simplicity of the crafting really make this game fun. While it’s still pretty basic, with only one map, it is in early access which gives the developers more time to work on and add to it.

Don’t let the fact that its early access fool you, this is a feature complete game. You drop in, and are forced to craft and find resources to survive. There is no instance where this game feels unpolished or not done. It has a great crafting system which relies on a resource called F.U.N.C and players have several ways to earn it. The easiest is to roam around the map and find barrels it’s stored in, or collect it from dead animals and piles of bones. The fastest way to gather F.U.N.C is to kill other players. Players also gather a limited amount over time and based on how far they move.  Everything in the game requires F.U.N.C to create. 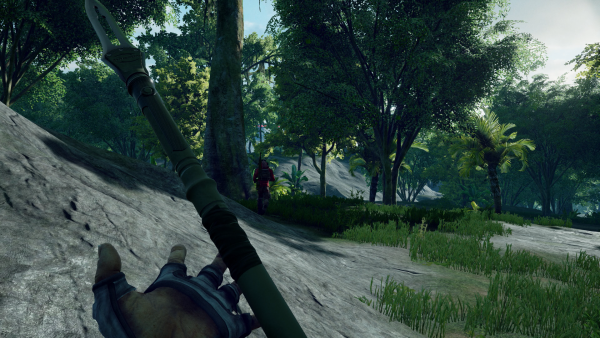 This tier three spear is not something you will be crafting.

Crafting is basic; the game has two materials, sticks and rocks. Both can be found lying around on the ground or produced by hitting trees or stone outcroppings. This means that the game basically has an infinite amount of basic crafting materials. However at least for now, you can only craft a small amount of items. These items are basically all tier one (weapons are divided in to tiers I, II, III and IV), and won’t do you much good in the later parts of the game. Still, after playing other games completely relying on RNG, it is pretty nice to be able to drop in and if you aren’t near any buildings or other lootables instead craft your early tier weapons. Currently there are about a dozen basic craftables, from a stone knife, to bandages. Most of what you need in the early part of the game is there.  Crafting however won’t get you the win, though basic weapons like a spear and a bow can be crafted, more powerful weapons are scattered around the map waiting to be looted.

Loot is handled quite well in this game, most weapons are meele, and guns are extremely rare. When they do drop they usually contain only a small bit of ammo, and crafting new ammo is expensive to the point of being prohibitive. So that leaves the large gallery of melee weapons. Everything from javelins to brass knuckles has a chance to drop from the various loot areas. I think my favorite part of the loot in this game is how scarce it is. It’s really rare to go to end game without a tier 3 weapon, but most of the game you can survive with just crafted weapons. Weapon management is extremely important, each players starts with 3 inventory slots, and can only get up to two more. 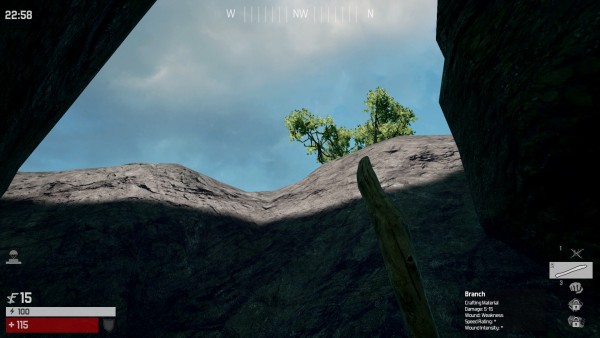 Sticks are very important, and you can also see here the limited inventory.

16 players spend 20 minutes surviving and setting up for a fight.  In other survival games I would often find myself kitted out in the first 5 minutes. The culling fixes this by mostly removing projectile weapons early on, and making weapon crafting cost F.U.N.C. This incentivizes players to search for loot, so as to conserve their precious cash for other things (more on this later). The easiest way to find loot is to just find a free loot box, or look in the many cabinets placed in the few, scattered buildings.  There are also paid loot boxes in almost all of the buildings, and around the center final area.

More on that central final combat area later on, first let’s talk about those loot boxes. They come in three varieties. Paid boxes light up blue and cost 50 F.U.N.C, free boxes light up green and are, well, free. The final type of box is the hardest to get in to, and requires explosives to open. These show up red, and are much less common.  Explosives are extremely rare, and have only shown up once in my dozen or so games.  Even with their rarity they just aren’t that good, I much preferred to do my work with a Tier III melee weapon.

The main reason why is because the melee system in the game is spectacular. It functions on two main mechanics, the first is stamina, which you use when attacking and running. The second is a rock-paper-scissors style block-push-attack mechanic. So if my opponent is blocking with their weapon, I need to shove them to break their block. If I try to shove them while they are attacking I will be staggered and open to an attack.  The developers have paid great attention to detail, back stabs and attacks from the front do different amounts of damage. Different weapon types apply different effects, sharp edged weapons cause bleeding, the blow gun causes poisoning, and there are myriad of status effects that can all be stacked on players. 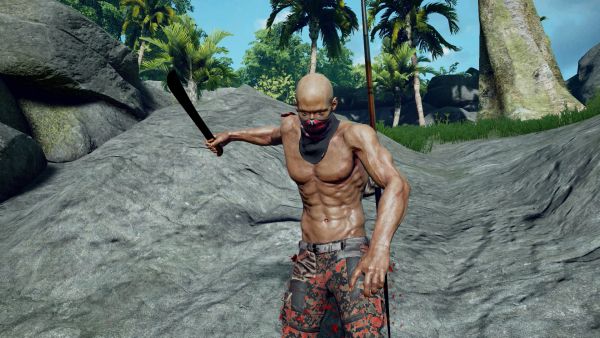 This Machete will cause bleeding

Ranged weapons are quite powerful, luckily all but the most basic are difficult to find. Basic bows and blow guns can be crafted as well as their ammo. However beyond this you can only find from loot. This makes the games many melee weapons much more fun to play with, and status boosts like Iron Skin, and super speed can make any fight interesting.  Ranged projectiles cannot be blocked and honestly just sort of feel a little over powered when you do get them.

The game features an extensive perk and loot drop system. Before each match players may select from a large list of perks to give them a slight advantage. These perks are pretty extensive, but I found myself using the speed one (+10% to movement) the one that gives me starting armor, and the one which provides a bit more damage. Selecting these makes a pretty large difference and different ones fit well with different playstyles. I think most players will settle in to a single set of perks that they use most times while playing solo and another while they play in groups. Perhaps this will even give rise to a sort of meta later in the games life. It already seems tailor made for the E-sports scene, with scoring already in place, and an E-sports sort of announcer who tells you when people are killed.

Remember those air drops? Even they have a huge amount of diversity, before the game you select the air drop you want to use and doing this can provide a huge advantage later in the game (more on this later). The rock-paper-scissors feel of combat unfortunately often gets lost as people just sort of run in and cut at each other or stab at each other. Guarding is pretty uncommon at least this early on in the games life. Weapons can also be charged to do more damage and break guards, but once again I don’t often see this. The final option is to throw anything you are holding at your enemy, this means you no longer have a weapon, but if you can’t reach your enemy sometimes that last desperate throw is what gets you there.

Finding loot, from guns to javelins feels really rewarding. Each cabinet I open could have a newer better item in it. That kept me moving and exploring rather than camping in one area as I often do in other survival games. The payoff’s for finding the games more powerful weapons just feel so good.  I am absolutely in love with how the game handles combat, looting, and just the general feel of being dropped in alone in this hostile environment. 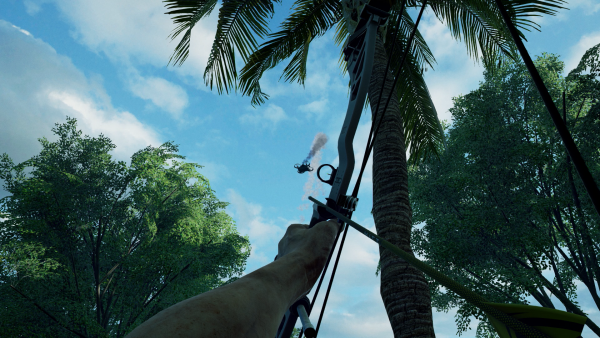 As the end of the 20 minute death match approaches the game begins to close down the map towards a single center area with elevated platforms. This is done via a released poison gas. The gas creeps in a wide wall of green death, pushing players closer and closer to the center ring for the final combat. Eventaully all players are forced in the small area with no supplies to fight it out. Before that happens, the game does several airdrops which usually contain rare and powerfull items. Players can also call in an air drop for a cost. Perhaps the neatest thing about airdrops in The Culling is how you ca shoot them down. If you see one of the quadrotor drops coming in and you have a any ranged weapons (or its low enough to throw at) you can cause it to drop the care package where ever you hit the drone.

The formula has become pretty standard in survival games, ARK, H1Z1 King of the Kill, and Day Z, just to name a few, but The Culling shows us that even when the genre is lagging it’s easy to inject fresh life in to it with innovative new game mechanics. The game has a ton of potential, and really just needs some additional polish to be well worth its small price point. I would like to see a few more level layouts, as well as a bit more diversity in terms of player characters (as of this writing you cannot select female, though the option is there but greyed out). If the developers can keep up with the pressure that early access brings this game has great potential