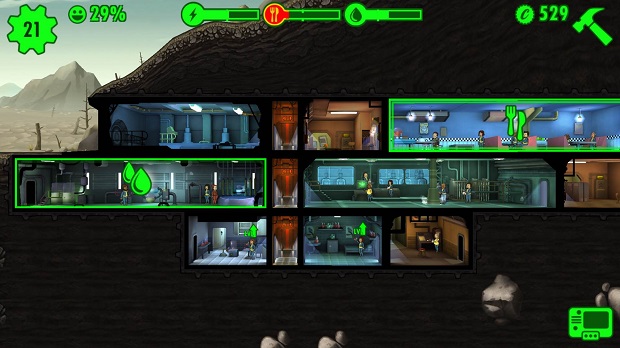 The surprise mobile hit Fallout Shelter has been updated to version 1.4 according to a press release that Bethesda released this morning. This brand new release offers players the chance to check out a crafting system for the first time. Overseers can turn the useless junk that their vault dwellers might have laying around into useful items to help them survive. Other enhancements include new rooms like the barbershop which will allow you to customize the look of any dweller as well as new pieces of fashion and pets.

Fallout Shelter was one of the many surprises Bethesda had in store for fans at 2015’s E3 conference. The game was immediately announced and release the same day and allows players to take on the role of an overseer, building and expanding one of the universe’s many fallout shelters. The game has been among one of the most played titles in Apple’s app store and has grossed over $5.1 million dollars in microtransaction related purchases. It is available for both ios and Android.

Here are the partial patch notes that Bethesda released today:

· Turn worthless junk into useful items! Introducing… crafting!
· New Rooms! Build the new Weapon and Armor crafting rooms and use them to create your own items in game!
· Lunchboxes now contain a bonus 5th card: Junk! Trust us – it’s more useful than it sounds. Lucky wasteland explorers may also find junk on their adventures.
· Take the Overseer role to the next level. Build the new Barbershop and customize the look of any Dweller.
· Keep up with the latest fashions! Find new Outfits and Weapons straight from Fallout 4 in lunchboxes, or craft them yourself!
· Because four-legged companions bring overwhelming happiness, we’ve added new Dogs and Cats, and are introducing… Parrots! Plus, new Pet bonuses!
· Time of day is now properly reflected. Because authentic Vault simulation is our #1 goal!