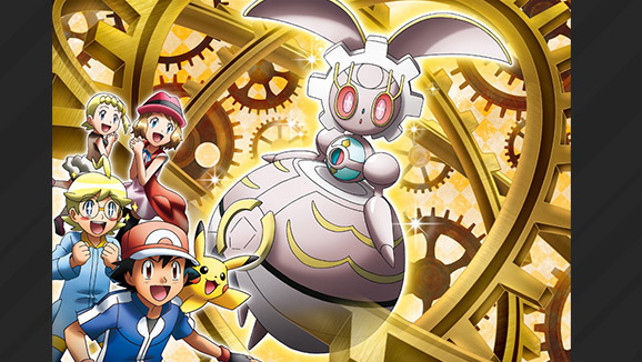 The Pokémon Company released information about a new mythical Pokémon which will be featured in the next feature film. The newly discovered Mythical Pokémon Magearna will appear in the next Pokémon movie, expected for release later this year. Known as the Artificial Pokémon, Magearna has a metallic body and was created by humans 500 years ago.

In this latest Pokémon full-length feature film, a mysterious force binds Ash to the Mythical Pokémon Volcanion when it falls from the sky. Volcanion can’t get away, and Ash is dragged along as it continues on its mission. They arrive in a city of cogs and gears, where a corrupt minister has stolen the ultimate invention: the Artificial Pokémon Magearna, created 500 years ago. The minister plans to use Magearna’s mysterious power to take control of the mechanical kingdom. Can Ash and Volcanion work together to rescue Magearna? One of the greatest battles in Pokémon history is about to unfold!

More details about the Mythical Pokémon Magearna and the next Pokémon movie are expected later this year.