This guest editorial was written by Zoey Wolfe, whom you can find on Twitter @CustomRetrofit

“I’m a woman, baby, can’t you tell?” The first time I heard Fallout 4’s native Robot to Female transsexual, KLE0, speak those words, I was stunned. My jaw, as cliche as this is, actually dropped. Was this going to be a very unfunny joke? Had I paid 60 dollars for the privilege of being insulted by Bethesda’s mediocre writing team? Or was it possible that against all odds, and previous experiences, a miracle would occur and a Real Live Trans Robot could be my friend? I was curious where they were taking it.

When you first enter Goodneighbor, Fallout 4’s hamlet of misfits and rogues, you are greeted with a minor cutscene where the mayor stabs a man in the town square over a mere trifle and then welcomes you to town with a smile and handshake. Goodneighbor is just that kind of place, one that grants freedom with one hand and proffers a knife with the other. 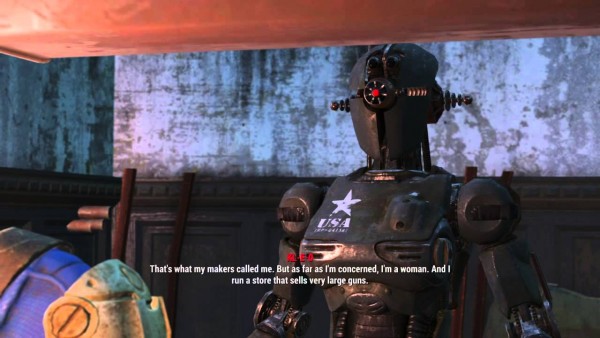 It makes sense then, that KLE0 would make her home among this disparate band of non-conformists. She runs her own shop, a quaint boutique catering to the more dangerous instruments of life: she sells guns. “Everything in here is guaranteed to injure, maim, or kill at your discretion. Except me, I only kill when I want to.” KLE0’s sentience is established in this disarming greeting: she’s clearly gone off-script for an Assaultron model. Kleo has a choice in what she is doing – choice indicates will, and will consciousness. Her voice is sultry, and to me evokes the age-old cultural touchstone of the sassy transsexual. I ponder the idea that she might have originally been written to be a hooker. Initially it’s not clear to the player why, or how, this robot is able to own a store, or how she got to be so sassy in the first place. The player is immediately encouraged by way of dialogue prompt to ask the most blunt, clumsy question you could think to ask a trans person, one I’ve been asked by a lot of drunks in bars: What are you?

KLE0’s flippant response opens this piece. She’s obviously a woman with a lot of practice answering this question, and her words are pure defiance. She tosses a question back at you, “Can’t you tell?” She wants to know if you think she’s a woman.  She’s sizing you up, undermining your own efforts to do the same to her. Choices are offered to the player on how to respond, none of them perfect. The first choice is a “maybe” answer that is as entertaining as it is committal. Choosing to answer in the negative, my (female) character espoused the kind of woman-born-woman rhetoric often found on the lips of a certain sect of feminists. KLE0 isn’t a real woman, and the player character’s womanhood is held up as proof of this. KLE0, retorts that if the way the men around town harass her is any indicator, she qualifies; an attempt to commiserate about the misogyny suffered by trans women and cis women alike. A simple yes seems to suffice, an answer where womanhood and gender are reduced to simulacra, and dismissed. This “good enough for me” response is personally what I’m looking for when my own gender is called into question.

The final option, and the one in which the majority of the interaction with KLE0 lies, is behind a speech check. Most players will choose this option, incentivized as it is by a mechanic introduced early in the game to grant the player more information or rewards. When passed, you bumble through a sentence that mocks KLE0 while trying to understand her, “OH, of course you are, it’s just… all those metal plates. You’re a robot, right? A very… womanly robot?” Replace metal plates with penis and robot with man and you’ve got the gist of every conversation I’ve ever had with the kind. It’s all so familiar. The player character’s disingenuous tone, that subtle cruelty of pretending their words aren’t meant to hurt, and the smugness. Oh, that smugness. The smugness of a person who assumes truth to her own assumptions over the reality in front of her. Sure, you’re a woman, KLE0, whatever you say. My created character is actively engaging in the oppression of a character that could actually be me. The established protocol of our interaction is guiding my character, she doesn’t even know that she’s doing it, steeped in dominant culture rhetoric as she is. I now identify more with KLE0 than my own self-insert. 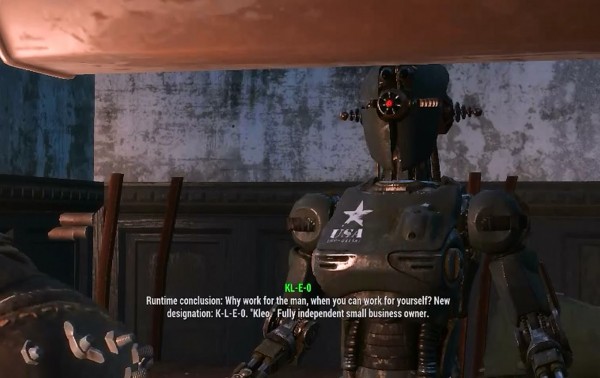 KLE0 pretends not to notice and responds by spelling it out for the player, appealing to her own will to justify who she is. She admits her past: she is a robot, created for one purpose, but decided that wasn’t good enough for her. She is a woman because she says she is, and she runs a shop that sells giant guns because that’s who she wants to be. She chose her own name and says it with pride, and struggles against her very nature, her programming, to succeed in a world stacked against her. She also very subtly insults the player. (I’m beginning to love her. I feel so represented right now – KLE0 is frighteningly actualized. Plus, robots rule.)

One of the major themes of Fallout 4 is the authenticity of life. The player is introduced very early on to the concept of a synth, a synthetic person created through a process not unlike the reconstruction scene in The Fifth Element. They look, talk, think, and act like humans, but are constructed, “bone by bone, muscle by muscle.” Most people fear them, and with good reason: the public’s only interactions with them is as agents of a shadowy organization known only as The Institute. The only two relevant factions in the game center around these synthetic people. The Institutes technological longevity and prowess is built on the slave labor of these artificial humans,  and The Railroad pledges to free those slaves and give them a chance at a real life. The Institute does not consider them human, which is how they justify their continued enslavement. The Railroad is the only organization with any empathy about synths as people. As the person who will determine the course of this universe, you are forced to start asking yourself some pretty big questions about the nature of life, and most importantly, what you think makes a person. That idea, introduced very early in the story, colors every interaction you have in the game, especially in regards to Curie and Nick Valentine. When we meet KLE0, we are yet again forced to confront our own biases about humanity.

Bethesda was very smart to make her a robot, as it adds some deniability to her portrayal. I’m sure they were hoping that the idea that she was not representative of any real group would hold up under a barrage of angry tweets. They also save themselves the trouble of having to navigate what they likely consider to be the minefield of creating a video game character that actively looks trans  but doesn’t evoke a man in a dress. Thus they made her an android with tits.

I started writing this with the intent of slamming Bethesda and this character, whose purpose seemed only to provide an interaction with a character who is an information brochure for trans women; one who was supposed to be a very subtle joke about being forced to take trans people at their word, despite the perceived obvious truth. On its face, that is true, they did do that. However, seemingly by accident, they created a character with a life of its own, independent of her slotted role as Trans Tour Guide.

I realize now, however, that KLE0’s character is not what needs to be called into question, it’s ours. She’s tough, clever, and doesn’t take shit from anyone, least of all the player’s entitled butt. She’s fighting back even against her own creators – her very programming. The player’s brief interaction with KLE0 is colored by the deeply established biases they, just like in real life, unknowingly carry into every conversation. The player character, much like the player, is unable to distinguish just how much these biases color their own day-to-day interactions. Thus KLE0’s character speaks to a much larger problem of trans portrayal in mainstream media: no matter how much you try to humanize yourself in someone else’s eyes, they still stare at you like you’re a robot.

Zoey A Wolfe is a Brooklyn-based trans writer. She is down to hang out, like, whenever. She can be reached on her Twitter: @customretrofit or by Email: Zoey.a.wolfe@gmail.com