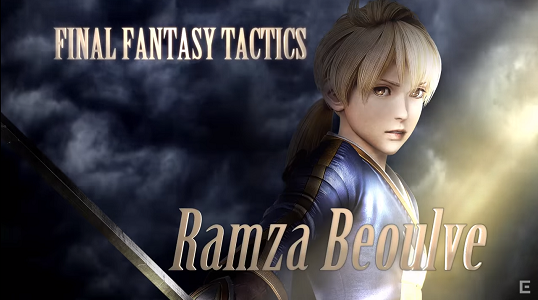 The Lion War is not the only place we can see the Beoulve’s exploits. Nomura’s announcement for Ramza joining the Dissidia Final Fantasy Arcade cast (thankfully without eighteen belts, but at least he has a nose!) was made almost a year ago, a trailer from Square Enix today finally shows off what he can do. Given the direction towards 3v3 team fighting, Ramza seems to take a slight step towards a support role, with  “Shout” buffing either teammates or himself, with other Final Fantasy Tactics favorites like Ultima and even Throw Stone making it into the mix.

Players of Final Fantasy XIV: A Realm Reborn might recognize that his Japanese voice actor is shared with Alphinaud Leveilleur, with no word on if Phil LaMarr (War of the Lions) will reprise the english role, when and if a console release ever happens. While there are no signs of the villains, or even some of the newcomers from Dissidia 012 as of the time of this writing, some of us will be keeping our fingers crossed that they will join newcomers Ramza and Final Fantasy XIV’s Y’shtola.

Dissidia Final Fantasy Arcade was released November 26th, 2015, and has been guaranteed to be an exclusive for at least one-year.