Carbon Games, the creators of AirMech and the Oculus Rift launch title, AirMechVR,  found their domain http://www.carbongames.com/ was blocked by the major ISPs in Portugal on January 20th, 2016. Carbon was notified through their support requests that they were blocked, while Reddit kept a detailed thread of information about the block, as the block is Portugal’s first block on a website without any justification.

LinkRaider, a Redditor who claims to be part of the team that created Ahoy!, an extension to bypass the block in Portugal, said that they first became aware of the block last Monday, meaning that Portuguese fans of AirMech may have had trouble accessing the domain for several days. It was also noted that the Portuguese ISPs failed to block carbongames.com lacking the “www” prefix.

Page Portuguese were directed to when trying to access www.carbongames.com which says ” The site that you’re trying to reach was blocked due to an order from the Regulator Agency.”

Carbon has expressed their confusion over the block, with James Green, the Game Director at Carbon Games, stating

It’s super confusing why we would be blocked. I expect this is just a cause of an automated system going out of control, and I hope this serves as an example of why automated systems to block people’s access to information can be so dangerous. It’s a shame that Portugal is going down the same path as some other countries who try to restrict what their citizens can see online.

While Reddit was quick to theorize reasons behind the block, from Portugal testing internet censorship to claims that AirMech was violating copyrights, it appears that the block was likely a mistake.

It seems that the block came from the company SRIJ which regulates online betting sites, suggesting that Carbon Games was likely confused with www.carbongaming.com, an online gambling site. Regardless of the justification of the block being instituted due to a mix up, many members of the online community have shown great concern over this block occurring without legal proceedings or warnings, feeling it shows the dangerous side effects of internet censorship. 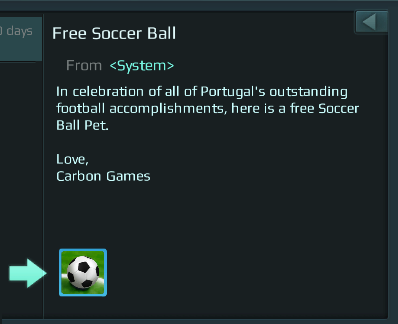 Message sent by Carbon Games to its players of AirMech.

Carbon responded cheekily by sending all AirMech players that log online on January 21st a free Soccer Ball Pet and a message that reads:

In celebration of all of Portugal’s outstanding football accomplishments, here is a free Soccer Ball Pet.

We’re all big fans of Portugal’s national team, so this seems like a nice thing to do. They can block our website, but cannot block our love of football.

With government mandated blocks on domains rising, more companies may fall victim to unjustified blocks, potentially harming business by blocking costumes. Moving forward, it will be interesting to see if Portugal owns up to its error and if blocks without review or justification may be abused in the future.

Disclosure: Renee founded her company, Stumbling Cat, with Matthew Endsley, the CTO of Carbon Games, and has close personal ties to him.