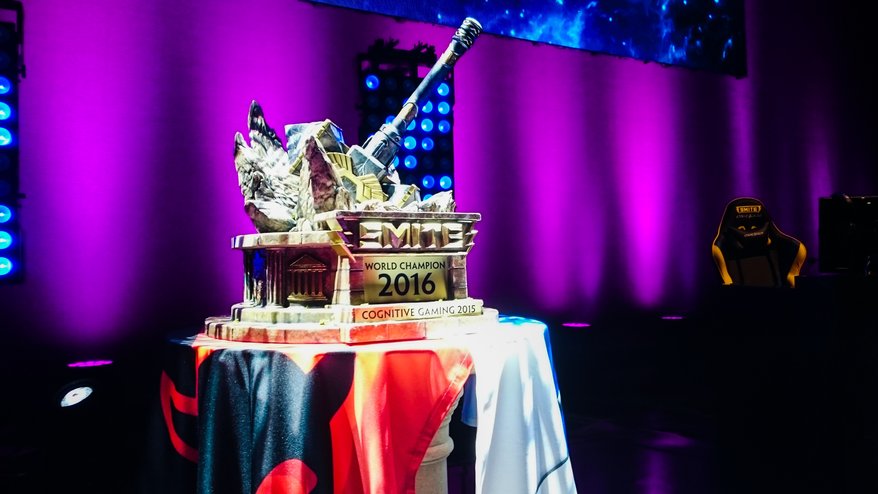 European second seed Epsilon won the 2016 Smite world champions. They defeated North American underdogs Enemy 3-0 in a run. The games were not as exciting as I had hoped. If you have never played Smite its a first person MOBA. Basically league from the prospective of the champions and with all aimed skill shots for the auto attack (Which I suppose isint an auto attack if you have to aim)

A confident first win suggested the Epsilon had figured out the North American metagame after their 3-2 victory over returning champions Cloud9 yesterday. Once again, captain iRaffer’s Ymir—a support character that isn’t valued in the US—proved to be a vital playmaker, while jungler Adapting turned in a brilliant performance as Thor. But the North Americans were not going to take that lying down Enemy fought back hard in game two, in particular with their jungler adjust on Serqet. Sadly this could not outmatch Epsilon solo laner Dimi, whom despite struggling with illness throughout the tournament was able to completely go ham as Tyr, soloing Saltmachine’s Bellona and acting as his team’s unstoppable front-line in  late game team fights. Epsilon midlaner Yammyn as Isis also was crucial id turning late game team fights in favor of the European team.

Enemy would go on to take game 3 and sweet out the North American team despite losing in the jungle Enemy’s Adjust fell behind on Hun Batz early, but  Adapting played an even better game than he had previously evening out the mid game. Epsilon captain iRaffer proved that Geb is useful again using his shields win , and a great late kill on Adjust by Yammyn’s Medusa tipped another close game Epsilon’s way. This series was really a great close one to watch and despite its 3-0 end run, it was really a much closer set of games that it appears to be. It really ended when Adapting landed a Thor ultimate right in the sent of Enemy killing three of their champions. With several members of enemy down, Epsilon was able to push and take the Phoenix and Titan thus ending the tournament and winning the prize of $500,000

Yammyn was awarded tournament MVP for his tireless work through out the series, and a European team went home with the Championship. This tournament has overall been a great wonderfully organized well planned love story to Smith, which despite not being as popular as league still has a dedicated following, and plenty of pro teams to fill out its roster. I am expecting big things from Season 3 as smith goes head to head with that other moba which has a big name and a lot of fans.