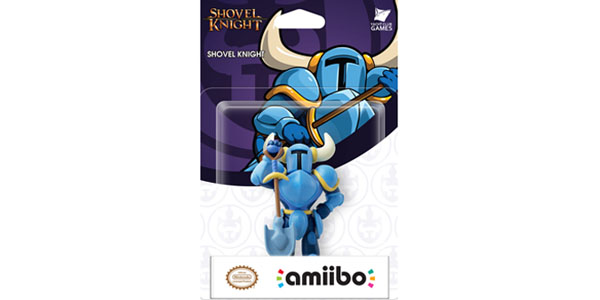 Surprisingly enough, unlike seemingly all other amiibo figures, Shovel Knight is useable through the packaging! So if you’re a collector of amiibo figures, you can keep Shovel Knight secure in his box and still use those neat new features available from using him. Isn’t that great? This is currently what we’ve seen from the first release Shovel Knight amiibos. It seems to just feature two cardboard flaps at the bottom and no NFC inhibiting foil piece.

So what else can you do with Yacht Club Games hero’s amiibo that was just released today? Let’s take a look at the details.

Cooperative Multiplayer – exclusive to the Wii U version of the game, players can scan the Shovel Knight amiibo and take on Shovel Knight’s quest cooperatively with a friend.

• Deep Customization – On Nintendo 3DS and Wii U, the amiibo can be used to level up and customize Shovel Knight with new visual enhancements, relics and abilities.

– Level up by defeating enemies and finding treasure!

– Customize the look of your Shovel Knight with cool and crazy cosmetic options!

– Use your custom amiibo seamlessly between 3DS and Wii U!

• One amiibo, multiple games – The figure will be supported in future Yacht Club Games and Nintendo products! Stay tuned to amiibo.com for compatibility details in new games.

For those of you unfamiliar with the game, here is the trailer below. It’s quite an awesome adventure that I’d say mixes elements of Duck Tales for the original NES as well as Zelda 2: The Adventure of Link for town exploration. Regardless of what system you’re playing on it’s a lot of retro styled fun!