Kickstarter is often a place where you can find interesting and odd things. But it’s also a place where you can go to get a lot of money and not do a lot. It’s both great and evil at the same time. This project is a wonderful example of what can be a disaster on Kickstarter. Started just a few days ago “Star Wars Open World RPG” is a project started by “Devin” a 20 year old man from Grapevine Texas who just wants to make an open world star wars mmo to answer the question “Ever wonder what if would be like if you were a Jedi with no boundaries, and could explore the galaxy freely?” 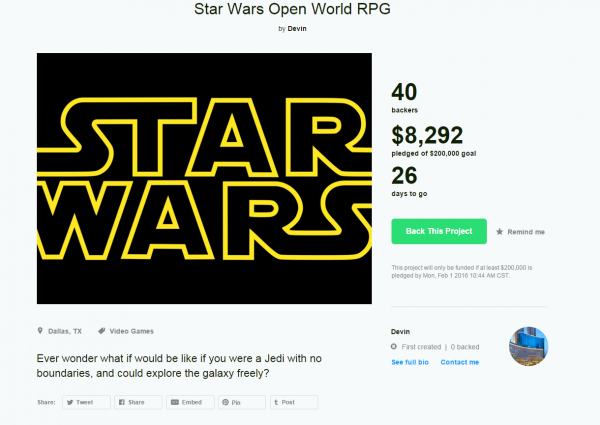 Ok, so lets get real here for a moment. WHAT THE FUCK ACTAULLY. Look I get it, you love Star wars, so do I ok? It’s a great universe to create in, it’s a wonderfull canvas to tell stories against, we all loved KOTOR, but that was a huge AAA game that cost 200million dollars to develop. Now you want me to belive that some dude from Texas can make a star wars MMO for 1/10th of that cost? OH! And he doesn’t have the licensing from the now Disney owned property.
Look its not that I don’t support Kickstarter, or that I hate crowd funding but lets just take a look at what this guy is really asking for. The goal is 200,000USD, which seems like a lot for sure, but honestly is essentially nothing for game development, even the most simple AAA games have budgets in the millions of dollars and development cycles in the years. Never mind the fact that this Kick Starter cant even be bothers TO FIT THE COPYWRIGHTED STARWARS LOGO TO THE KICKSTARTER IMAGE BOX. And lets be honest how much of Star Wars fan can you be when you spell out “obi one kinobi” as the iconic character name for Obiwan Kenobi? (by the way even MS word recognizes that name). YET, this game has at time of press $8,226 dollars in backing! Now I fully expect that this will be removed quite quickly as a scam, but the fact that it exists in the first place is such a farce and just servies to highlight the problem that is Kick Starter games today. “Also no promises, but the backers that give for the 60$ reward will get the game a day or two before original release.” THIS IS ACTAULLY IN THE KICKSTARTER, along with reward tiers like 10$ get a letter from the development team and 1500$ get your name in the game. 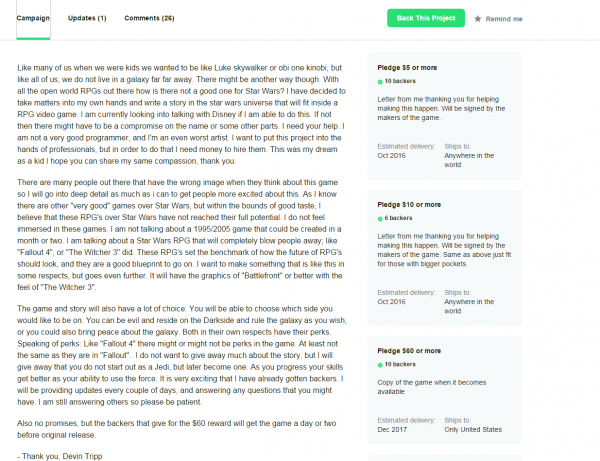 WHAT THE FUCK, just honestly like aside from the fact that this Kickstarter is very likely meant to highlight the flaws with the very system it was created on, what the fuck is community who is currently donating to it thinking? NO one is going to be creating a un-licensed Star Wars MMO while this is still being rumored? Please Disney will come down on this dude like a TON of bricks. But it’s possibly that before he gets the big C&D from the Disney Overlords he’s going to end up possibly walking away with people’s money. The whole idea of Kick Starter has been for quite a while both a wonderful and terrible way to both enable great games, and absolutely rip people off. Lets never forget this  shining example of what can happen when you don’t know what in the fuck you are doing, and how when you say something like you want to make an MMO but you have no coding experience, or you have nothing to show for it even with 200,000$ YOU ARENT GOING TO GET ANYWHERE!
I know this Kick Starter is fake, I have searched my feelings and I know it to be true. However that’s beside the point. Im still mad, Im mad that this even exists, Im mad that Kick Starter (where the now billion dollar Occulus Rift began by the way) has become a suffering cesspool of garbage. Now im just as likely to go there for a good laugh as I am to go to try to find a good game to back and be excited about! Honestly though it’s never been a good platform for games, games have a long development cycle, people are in a hurry. When I give you money for a product I expect to receive a service in return, instead when we deal with Kick Starter I give you money, you give me words, or an image, and I wait until 2017 hoping I’ll get a game, only to find out the game studio went bankrupt and ill never get my game. While there are good games and studios on Kick Starter I honestly feel like I can’t back them because its just too much of a risk. It’s a great tool for crowd funding but im just personally completely done with it. While id love to back projects like this one (an episodic RPG) Iv been burned so many times by studious disappearing overnight, games never being delivered, or endless feature creep that I just cant bring myself to do it. The Star Wars MMO is really the final nail in the coffin for me. Stick a fork in me and call me done, Kick Starter and I are finished forever.