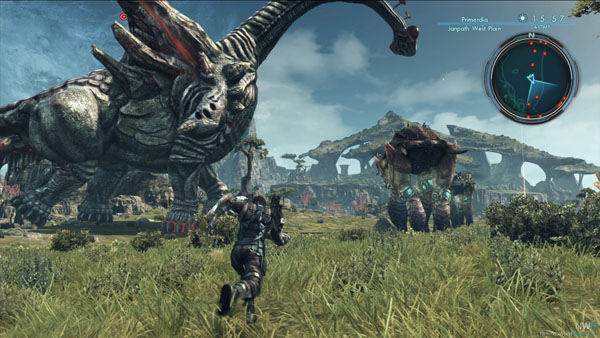 Traveling across planet Mira in Nintendo’s latest Xenoblade game may seem incredibly daunting at first. You’re given a lot of missions to keep you close to home and some pretty big, scary, aliens roam the plains around the city of New LA. Are they aliens if you’re on their home planet? I guess it’s all a matter of perspective. Today we’re taking a look at what it’s like to play Nintendo’s latest exploration JRPG!

You begin the game by making your own avatar. Unlike in Xenoblade for the Wii where you played as Shulk, this title focuses on your own story. Really Chronicles X is more like an MMO that is played relatively offline. You do eventually unlock challenges that players pool their daily accomplishments against, and you can hire virtual versions of other players avatars to help you, but otherwise it’s not a multiplayer experience. However in that sense, the world can somewhat feel restricted by higher level monsters blocking your progress. Not all monsters will attack you outright though and I haven’t tested just how far you can explore before any one hit beasties catch up to you.

Thankfully, dying in Xenoblade CX isn’t that bad of a thing. You’re returned to a checkpoint with seemingly no penalty. Unless one is imposed later in the game, this is actually a refreshing way to focus on the exploration aspect without being horrified at the aspect of leaving New LA.

Interestingly enough, not leaving home is an option. Early on you’re given a choice of what Division you want to join. From what I’ve read online, and even the games prompting, this isn’t a big choice. You can do anything you want in the game. This is just a way to boost up your rank a little faster it seems among the overall team of colonists you join. The basic intro to Xenoblade CX is that Earth has been destroyed and after an alien attack on your colony ship in space, you and the remaining population are trying to make a habitat on the planet you’ve crashed on. Divisions basically assign tasks to the residents of New LA. Some may like to wander into the outlands and plant radar probes, or look for precious resources. Others may want to quest for debris from the colony ship you flew here on. There’s even a division that focuses on mediation, which literally means mediating the problems of residents who live in New LA. So if you don’t want to get your hands dirty fighting monsters, you can stick around town and talk to people.

So far in Xenoblade CX I’ve felt pretty powerless though. Maybe all of the enemies are meant to be taken down in lengthy battles. Otherwise I just feel like my character is a weakling. The game sort of mashes up Final Fantasy 12’s combat system with an MMO skills bar with cool down timers. Unlike most of my friends, I liked FF XII’s combat system, so this part has been cool for me. I just want to decimate some of the smaller creatures! A huge dinosaur like lizard monster that looks like it could eat me? Sure, I’ll take a few rounds to get through that. A smaller sheep or bug like critter I expect to plow through faster though. Not that I haven’t wandered and focused on the main story, but I have invested a decent number of hours into the game. I expect things to get better, and the story has been enjoyable. I just wish I felt a little stronger so far. You can add other characters to your party and some quests even require you to bring along certain people.

One other nitpick I have is the commercial district of the city. As a BLADE, the faction you seem to get roped into early on in the game, you have access to Armory Alley. Basically it’s a couple shopping consoles just outside of BLADE HQ. It’s probably just the MMO feel and how beautiful they’ve make the games commercial district, but my first impulse was to rush into town and look for clothing shops. Well there aren’t any besides item drops and the one console in Armory Alley. Even then your options are limited at first and from an online search it sounds like you can find cooler outfits than you can purchase. This felt distracting since I wanted to spend time in the city ever since the E3 debut of Xenoblade CX. Yes, it’s my fault for assuming what the game would allow me to do. But there is thankfully a lot of other content to explore quest wise in the city.

Xenoblade CX is an interesting creation and I’m sure I’ll be spending many more hours with the game. I haven’t even unlocked a Skell yet which is the games version of giant mecha. Nor have I traversed into one of the neighboring lands. So there is a lot to do yet. I can’t say that I’m not getting my money’s worth. I just want to feel more powerful while I do it earlier on.