Where do I start with Underrail?
No, really, where do i start? not just the review,  but in the game itself? At first the game seems very streamlined, but I found myself lost even in the initial quest, even if it was largely due to my own mistakes. I first went into the railway system, finding death at every turn, wasting a full five hours before encountering the correct path back, where I started at the elevator, heading back in, to find the Cave system I was intended to explore.

The main attraction of this game is it hearkens back to the Classic Fallout 1 and 2 system of a top down RPG and isometric in nature. Underrail’s graphics however suffer in this department, they are very limited by the media, and very underpolished in presentation. the fog of war is very stark in contrast to the visuals, choosing to just cut off the pixels, with no blending or fading into darkness. There’s a rather deep stat system, alongside a unique system called “Feats” and  it is rather analogous to the perks system present in fallout games. The parallels do not end there. 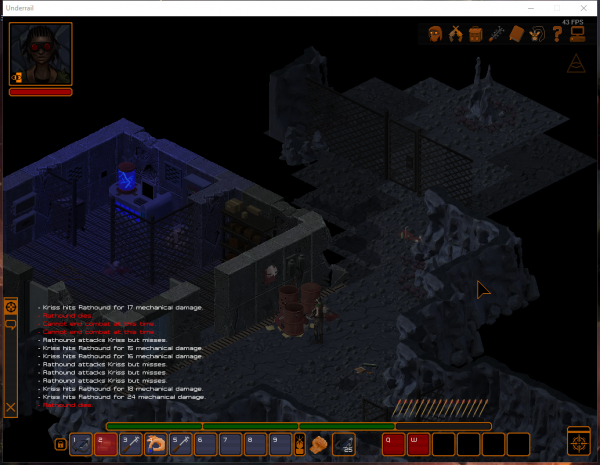 The game’s graphical harshness leaves a very lackluster feel to exploration, everything just is just cut off harshly and unappealingly. This and the lack of object permanence beyond your current vision for creatures and people, while the terrain remains, makes it very odd to play and wander around. The sprites feel jagged, unpolished, at least they maintain a solid grungy aesthetic. This however made the world feel very old fashioned, and I think the game could have been much more polished, while maintaining the grungy aesthetic. My main complaints, visually, are the overworld having a terrible design decision to make all walls visible, specifically the back side of walls that realistically would be a cave wall, entirely rock on the side between the player and camera. This not only obscures gameplay elements very well, such as the rats you’re sure to encounter, but also is just entirely illogical and does not blend with the stark black backgrounds in any way, making it feel very lackluster in map design, despite some interesting scenarios. 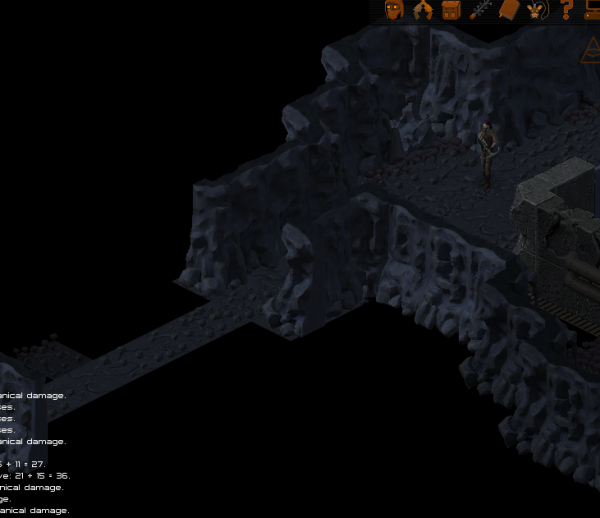 The game also has scenarios. It is after all, a bit of a tactical game, right? Top down isometric strategy and all that.
Well. It’s combat is rather lackluster as well. Most options for fighting are ranged at the start of the game, and I chose a crossbow, reliable, doesn’t need to reload in combat, and seemed to be a logical choice. Aiming for a rogue kind of character, I went full combat stats, running out of slots to fill, I dropped some into pickpocketing, and ended up with a defensively powerful, offensively top tier starting set of stats, able to reliably dodge and defend, but also good power with my crossbow and guns whenever I got around to trying them.

And…. the game just kind of lets you sit there and click to attack.
That’s pretty much all there is to it. The game has  a point based action system, where you get movement points and general points, Green being movement or action, and yellow being movement. This makes a theoretically rounded system, where you can move to kite or reposition, and also attack, without wasting any of your attack points. 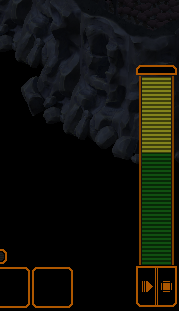 Except. The enemies only seemed to want you to kite backwards, specifically trying to avoid whatever group the encounter was. Just run and shoot. Very little strategy was applicable. Rathounds, the main early enemy, get bonuses to damage if they manage to group up around you, so you’re always backtracking and hitting at the same time. This however, only manages to keep you from getting surrounded. The rats can always keep up, if they get to you, and they generally do, because of the aforementioned issues with walls in between your player and the camera, you can have difficulty seeing them before they are on your character, if you get into a combat situation any where near a wall.

But wait, I hear, there’s also Psionics! A full set of abilities based on magic brainwave powers! Psionics are the most interesting thing this game had to offer to me. Abilities based on Psi Points, rather than ammunition, or just cool downs. But my character was Very poorly specced using these abilites. You can do such things as make the enemy run in fear, or make a mental doppelganger that attacks the enemy you made a copy of. You can also make them enraged, hostile to all possible targets, friend and foe, in the area. Make a force field, blocking all passage. Another disrupts accuracy around a target, and… that’s it. The rest just do damage, a few stuns tossed in there for good measure.
I respecced, made a new character and took the correct path from the start, entering the caves with newfound intention and hope for this game. Again, I ended up feeling like so much more could have been done. The abilities are not all that interesting past the first thought of them, the strategy possible quickly falling short due to limitations, this time, more falling into the issue of the extremely short sight range, fog of war popping up so close to your character that again, it falls to kiting whoever’s close, whittling them down while avoiding getting mobbed, and just hitting them with whatever damage you have. There was little strategy in the encounters i found myself in, and I got bored rather quickly again. The world was lackluster, it’s ideas sound, but it’s graphics dull and bland, it’s aspirations were high, but it’s failings were ever present. The characters had little draw in caring about any of them, and the world not interesting enough behind the dull exterior.

Reflecting upon the entire experience, I realize it’s target audience just isn’t me. I never played the first two fallouts, or any game of this type, really. I see an appeal in similar creations, such as the X-Com series, specifically the tactical play and surroundings being an integral part of strategy, especially unknown, foreign layouts, instead of repetitive maps such as some games like CoD or other shooters. But this was so half-present in Underrail that it was just boring. I was quickly derailed by other things I could be doing, I was very uninterested in the world, and I was very, very, uninterested in the combat.

If you’re looking for nostalgia and a new world, with all the issues that are likely to exist in those original fallout games, this might be your game.

But I was disappointed.