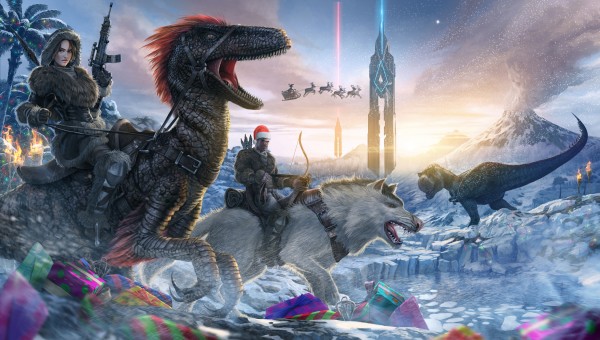 Dinosaur tamers and hunters beware because tis the season for Winter to come to the world of Ark: Survival Evolved. The latest update dropped on Christmas Eve and transformers the game world into a winter paradise while adding holiday event items, new challenges and special presents from Santa Clause stand in – Raptor Clause!

If you want to give your in-game house some holiday flair here are a few example of the limited time items that are available: Holiday Lights, Decorative Trees, Wreaths, Stockings and Snowmen.

To mark the end of 2015 the developers over at Studio Wild Card have announced that their close-out event for the Survival of the Fittest Tournament will be a 100 player vs 100 player epic elimination tournament featuring players from past rounds. The winning team will be able to donate $10,000 to a charity of their choice and the whole thing will be broadcast on Twitch.TV on December 29th at 9 AM PST.

If you haven’t played Ark: Survival Evolved the game is currently 40% – $17.99 USD for Windows PC. A version for Xbox One and PlayStation 4 (with PlayStation VR Support) is expected to be released sometime after June 2016.