GameStop has always been a leader in Black Friday video game deals. This year it seems will be no different. Offering stellar door busters beginning Tuesday, November 24, the retailer will offerPlayStation 4 hardware bundles with various extras and 50 percent off a variety of games. 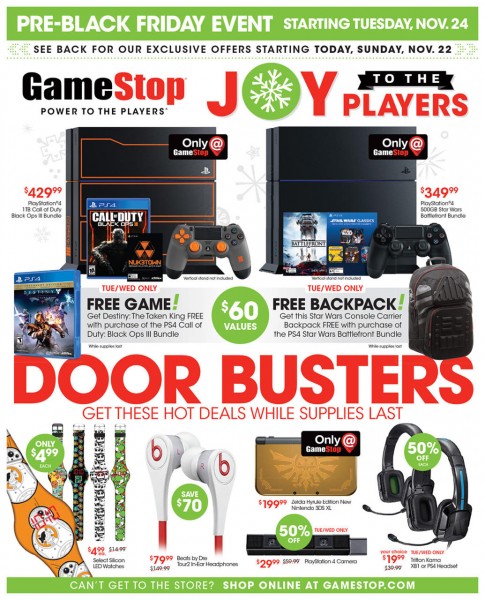 One of the “Door buster” deals, good November 24 and 25 only, is the Call of Duty: Black Ops III PS4 bundle with a free copy of Destiny: The Taken King – Legendary Edition. You can also get a free console carrier backpack with the purchase the Star Wars Battlefront PS4 system. Other deals include a perplexing set of LED video game themed watches for 5$ the Zelda Hyrule edition New Nintendo 3DS for $199.99, and a set of Tritton Kama headlets for Xbox one and PS4. Select games will also be 50% off for the duration of the sale. 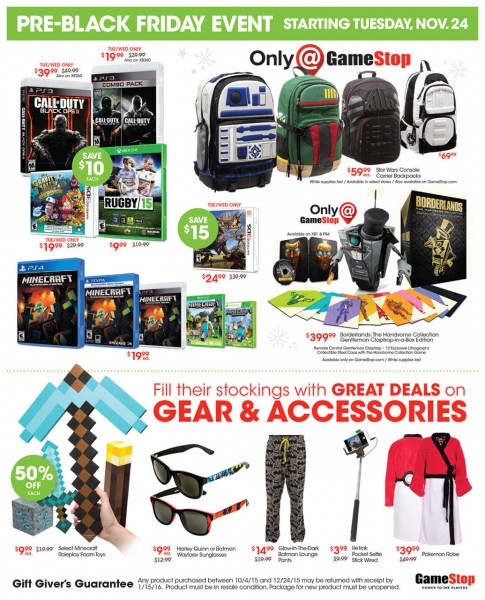 Also of note are is he Borderlands Handsome collection for 399$ and over 2500 games for under 20$  I also personally think the line of backpacks (perhaps an addition from the lineup of Thinkgeek?) also look really cool. Dont miss these and other great deals on Black Friday, and keep it tuned to Brokenjoysticks for all your needed Black Friday deals coverage!