Home / Hands on with Zen Pinball 2: Balls of Glory | Review

Hands on with Zen Pinball 2: Balls of Glory | Review

First off, I want to say that I’m a huge pinball fan since I got an Atari 2600 with Virtual Pinball back in 1995. I’d spend hours playing on it trying for a high score, so when I’m able to go to an arcade, I always hit up the pinball sections to see how high of a score I can get. So imagine my surprise when I was given an opportunity to try a themed pinball set for Zen Pinball 2.

After downloading the Fox Digital Entertainment Balls of Glory corroboration pack for Zen Pinball 2(ZP2), it came with four following boards to try out: Archer, Family Guy, American Dad, and Bob’s Burgers. At first glance, I noticed the most recently announced Archer board, and as being a big Archer fan, I immediately started it up to play. After starting it up, Archer’s theme played to my delight. 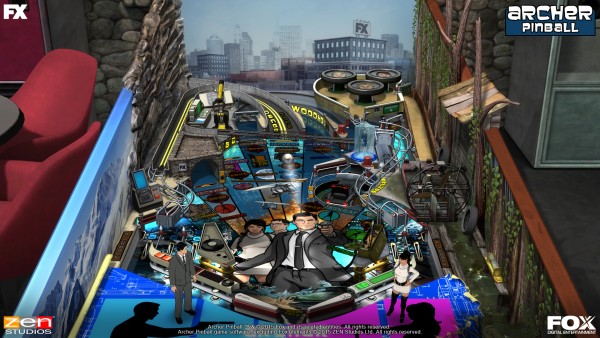 What Archer fan wouldn’t love to be able to play this?

With standard pinball fare, the player is able to rack up points by hitting bumpers, and by trying to complete minigames by hitting certain bumpers and objects a certain number of times, or though certain timed events. As an example for the latter, Archer’s cell phone rings and if you can light up the two small bumpers that are to the right of it, Archer will send it to one of his voicemail soundboards. It can be quite entertaining to listen to the small touches like this that the developers have put into the boards. One of the more unique minigames though is where it’s a first-person persepctive of Archer and you’re trying to shoot terrorists with a very limited ammo supply, all the while not trying to shoot friendly targets. 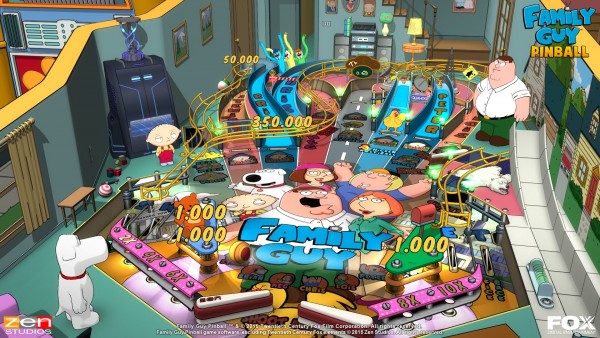 Starting up the Family Guy-themed board, I’ve found that it’s a more straightforward board, with lanes seemingly easier access with the ball, so there’s a bit of an easier time to rack up a high score. As with all the other boards, there are a variety of minigames you can play on this board, including a number of themed modes, one of which is Chicken Fight Multiball. By hitting the Giant Chicken drop target multiple times, the player triggers a special multiball mode where there are skinned pinballs of Peter and the Giant Chicken. With that, destructable props will give additional points when hit, and a special feature of points being given if the pinballs collide. While being more straightforward table, the minigames more than make up for it.

Next up in this pack is the American Dad table. One of the things that really stood out with this board is that after the ball is launched, it will come out on the left side of the board, instead of the right side, like most other tables I’ve played on. The main theme of this table is to light up the all the letters of the “AMERICAN” lights, and to start that up, the player must hit the Fish Bown multiple times to reveal a hole to activate a number of the main modes. From there, there are minigames like shooting targets with Stan’s gun, or trying to avoid Francine an Stan ice skating on the middle of the board while trying to hit randomly lit lanes, making some objectives quite challenging at times.

Rounding up the Balls of Glory pack is the Bob’s Burgers table. What makes this unique of the four tables is that the player has the ability to cycle from day to night by holding the launch button for 3 seconds to advance the time of day. Adding to that, there are different sets of minigames and separate sets of progression to be completed separately for day and night. One of the more interesting things to watch while it’s daytime is how Bob is cooking the food and how he reacts to a few situations, including a fire starting at Bob’s oven if the player hits the bumpers during two of the minigames until it’s extinguished by hitting his lane twice. For nighttime, one of the more intense minigames is when the kids go hunting for the Taffy Factory treasure before the factory is destroyed, which can be quite fun to do. 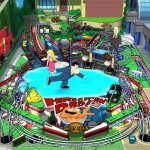 Can you hit the targets without hitting while Francine and Stan skate?

One glaring concern of mine with this pinball set is that the voices can get repetitive and it seems like some of the voice samples are not all high-quality audio, most notably Malory Archer’s voice on Archer’s board. I have not played any of the other boards that are available for ZP2, so I’m not sure if this is a persistent issue. Thankfully, if you’re not a fan of any one of the TV shows and you still want to still play them even though the voice samples are a bit too much, you have the option to turn that off! As not being a Family Guy fan, it made playing the board a lot more pleasant experience. 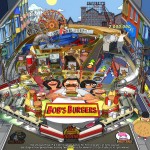 Can you rid Bob’s Burgers of it’s vermin infestation in a timely fashion?

Being able to play at least two boards that I like makes this worth it alone to play for hours at a time for me, and this is a definite must-have for die-hard fans for these TV shows. Each board is intricately detailed, and are quite well-designed, thus capturing the experience of the respective TV shows. Even if you don’t like one or two of the boards due to the content material, a good pinball board is a good board to play on. Overall, I loved being able to play a few TV-show pinball boards, and I’ll be spending hours for trying to get the high scores on the leaderboards