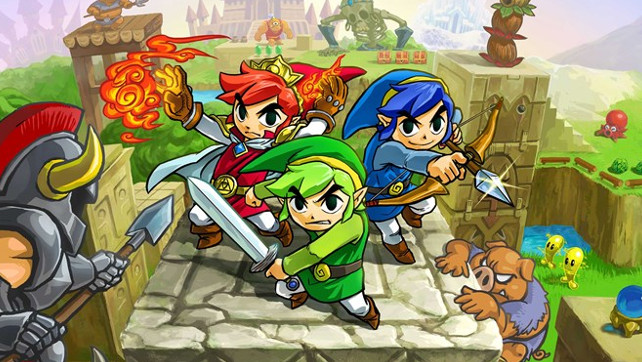 Nintendo held a special online-only stress test for their upcoming multiplayer focused entry in the Zelda franchise – The Legend of Zelda: Tri Force Heroes. Codes were distributed by the Big N’s mailing list and select 3DS owners were able to participate in a maximum of 15 hours with the game across three different levels with random strangers. I quickly grabbed my Kokiri sword and green tunic and ventured into the world of Hyrule for a few hours over the course of this weekend and I’d love to share some of my initial impressions.

Aesthetically Tri Force Heroes could easily be mistaken for 2013’s The Legend of Zelda: A Link Between Worlds and that’s quite intentional on Nintendo’s part – the two games share graphical assets and story setting and a somewhat open ended approach when it comes to the acquisition of items but beyond that the core gameplay of the two couldn’t be any more different. So graphically Tri Force Heroes is just as bright and colorful as you’d expect from any of Link’s adventures. If you are expecting The Legend of Zelda: The Curse of the Gritty Reboot look elsewhere! 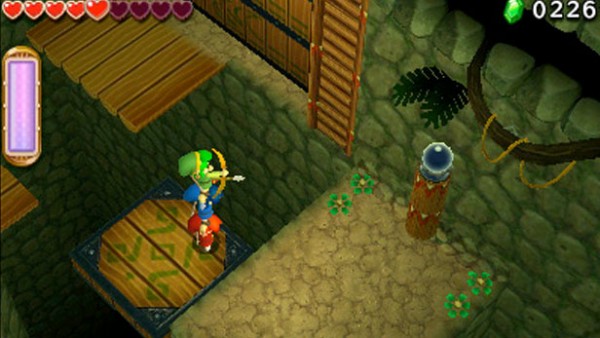 The ability to stack up to 3 links at once is a crucial technique in Tri Force Heroes.

What really sets Tri Forces Heroes apart from other entries in the franchise is the inclusion of 3 player controller Links that are on the game field at any given time. This means that the sometimes methodical approach that can be taken to solving puzzles in the main line Zelda entries is completely thrown out the window, exchanged for a frantic fast paced and sometimes unpredictable dungeon solving experience.

While playing online you and the two other Links must work together to solve the various puzzles that block your progression path. Each player is given a specific item at the beginning of each dungeon – in the easiest of the demo’s 3 courses all players where given the same item, while the hardest dungeon in the demo – the Fire Temple – gave each Link separate items. Using these items in the correct order and with the right tactic is paramount to solving your way through the dungeon. This can lead to cases where two of the three players clue into the correct solution while green link is still throwing himself off the edge trying to get a bomb across a chasm.

Don’t lie to me, you are going to spam these emoticons constantly, I know you will!

Now you might think that these cases of players not being able to clue into the puzzle’s solution would lead to absolute frustration but this was not my experience with the game this weekend. Tri Force Heroes does not feature any kind of voice or text communication between players. Instead you communication basic concepts like “Walk Over Here” or “Use Item” via very adorable small link emoticons. When used correctly they can clue confused players into the solution – where to place their bomb that blocks a specific player’s path, for example. When used for comedic effect you’ll get green link spamming Pom Poms to celebrate the fact that Blue just blew himself up for the third time. It’s this type of unexpected humor that gives Tri Force Heroes a bit of its charm and it is 100% created by the players in the moment rather than being a scripted events or fan service.

Another aspect that is on prominent in the Tri Force Heroes demo are the number of different outfits that Link can equip to aid him in the heat of battle. Sure you’ve got your standard green duds – the Heros Tunic – which add no bonuses what-so-ever but there’s also things like the Kokiri outfit, a callback to Ocarina of Time, and more importantly these clothes give Link the ability to shoot three arrows at once. If you’ve got more of a formal taste there is also Zelda’s dress which will give link an increased chance of finding regenerative hearts in tall grass and chests. Also available were the Lucky Pajamas which allow Link to randomly nullify one hit of damage and Tingle’s Pajamas (remember him!) that allows you to fall off a ledge three times before taking off a single heart.  Choosing the right clothes for the role you intend to play (Tanking enemies, shooting arrows etc.) can make all of the difference for your team. Don’t be like one of the Red Links I encountered and choose the Kokiri outfit in a level that has no bow and arrow.

I wasn’t expecting The Legend of Zelda: Tri Force Hero’s multiplayer to be as fun as it was during my brief few hours with it this weekend. Originally when the game was unveiled at this year’s E3 I wrote it off as another Four Swords Adventures type deal. This demo has actually changed my opinion on the game, the frantic nature of the multiplayer dungeons and the often ironic and sarcastic emotes that the community used had me in stiches all while smiling. Nintendo has taken a classic formula and re-invented it for a unique multiplayer experience that suits the Nintendo 3DS perfectly and there’s a lot more depth probably on the cartridge that we haven’t experienced yet – such as the game’s single player mode and outfit crafting.

The Legend of Zelda: Triforce Heroes will be released on October 23rd in North America. The special demo edition was only available to select 3DS owners via a random Nintendo email campaign.