As every Back to the Future fan knows, this year on October 21st, 2015 Marty McFly arrives in the future from 1985. To celebrate this momentous occasion developer Psyonix is releasing a special DeLorian themed car pack for Rocket League. I’m willing to bet that most of you have already guessed whats in the pack, but if you havent ill let you take a look at the image below to confirm what most of us already know. (its a DeLorian)

A statement from developer Psyonix on the PlayStation blog said  “Truth be told, we used to fantasize and joke about having the DeLorean Time Machine in our game months before it even came out. We were all such huge Back to the Future fans here at Psyonix, that it was one of the few ‘Holy Grails’ we had hoped for besides having a hit game. The fact that we’re getting both of those ‘best-case scenarios’ in the same year is an amazing accomplishment for us, they’re things we’ll never forget!”

The post goes on to say “Hopefully you’ll never forget your time with the DeLorean Time Machine either, as we’ve worked meticulously to recreate its look, feel, and folding jet-wheels just as they appeared in the original motion picture trilogy. Best of all, it’s a heck of a lot of fun to play with—and comes complete with its signature ‘Burnt Rubber’ Rocket Trail to boot!”

I love to see this kind of DLC its purely cosmetic, and it really plays to a fan base and if you like Back to the Future, you can buy this car, and if you don’t, then your game play experience is not lessened. The DeLorian DLC pack will be released for both PC and PlayStation for the LOW LOW cost of $2. I personally cant wait to drive around and leave a few flame trails! 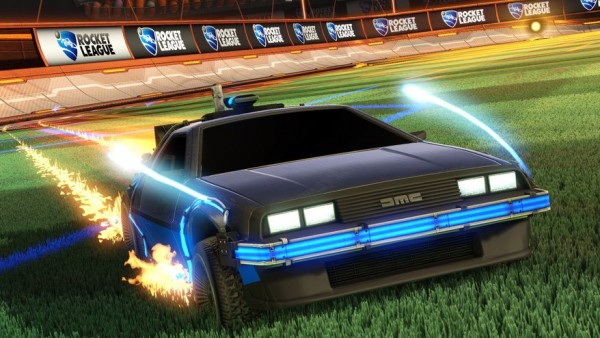