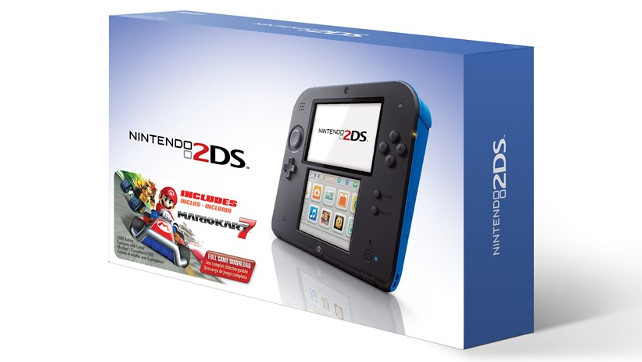 Nintendo announced that the price of the Nintendo 2DS will be lowered permanently as of August 30th.

“At a suggested retail price of $99.99, Nintendo 2DS is an even more attractive introductory option for first-time gamers,” said Scott Moffitt, Nintendo of America’s Executive Vice President of Sales & Marketing. “The new lower-priced hardware combined with the strong lineup of new games launching this year and arguably the best library of games in this generation makes it a great time to be a Nintendo fan.”

Originally launching in October 2013, the Nintendo 2DS system plays nearly the entire library of Nintendo 3DS games in 2D, as well as most Nintendo DS games. Players with Internet access can compete online, or enjoy local multiplayer co-op experiences with other Nintendo 3DS family system owners. With no hinges, the durable construction of Nintendo 2DS makes it perfect for younger players.

Nintendo’s newest game Little Battlers eXperience launches tommorrow, letting players build, customize and battle robots made from more than 4,000 in-game parts that allows for more than 30,000 different LBX robots. The game is one part of the strong franchise, which also includes an animated TV show and robot model kits. Players can team up with characters that appear in the TV series, or find friends who also own the game and a Nintendo 3DS or Nintendo 2DS system to connect via local wireless to battle it out or team up against tough opponents in the Ranking Battle co-op mode.

Other games for all ages and skill levels launching for Nintendo 3DS before the end of the year include Animal Crossing: Happy Home Designer, Chibi-Robo! Zip Lash, Pokémon Super Mystery Dungeon, The Legend of Zelda: Tri Force Heroes and YO-KAI WATCH.