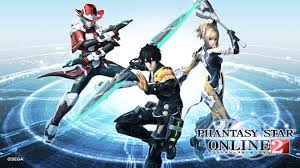 SEGA of Japan has announced an animated adaptation of its popular Japanese free-to-play MMORPG Phantasy Star Online. The anew anime titled Phantasy Star Online 2: The Animation will debut sometime in 2016 to commemorate the 15th anniversary of the original PSO on the Dreamcast and will take place on a near future presumably before the events of the game.

The Windows PC version of Phantasy Star Online 2 was released in Japan in 2012 with a PlayStation Vita version following in 2013 and an Android version for Smart Phones and tablets last year. A localized English version of PSO2 went live in southern Asia last March and there has been little word on a North American or European release outside of vague omissions by Sega America that the game has been delayed.

You can check out the website for Phantasy Star Online 2: The Animation here.